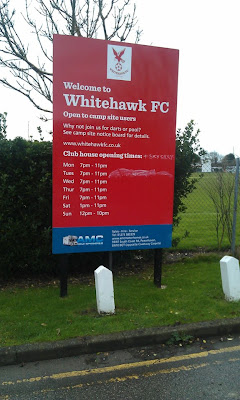 MMm this should be Brighton v Millwall, but a new one this time, no public transport = no game at the Amex. So Boxing days and my family head to Ditchling to watch Morris Dancing, I head to Whitehawk.

A crowd of 290 saw an entertaining 2-2 draw. Hastings next away game will be Middlesbrough in the FA Cup third round on the 5th Jan.

Tom Vickers who the Albion released earlier this season scored a stunning equaliser for Hastings in the last couple of minutes. Whitehawk who are top of the league are not best pleased. They had loads of injuries and suspensions and had just found old ex Albion player Tommy Fraser will be leaving in Feb for a new life and carear in Australia (signed by Melbourne FC).

Other Ex-Albion involved or could have been were Paul Armstrong (played), Sam Gargan (suspended), Tommy Fraser (Suspended), Darren Freeman (Manager and unused sub)& Chris Winterton (goalkeeper). I had also hoped to see Scott McLeish (but found out he left Whitehawk after 8 games to sign for Chesham Utd!)