Wednesday and it was the short trek to Wembley. We sampled the new Weatherspoons 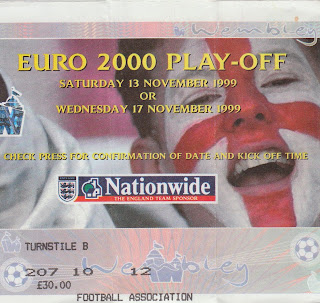 outside Victoria station and others headed for the Stage Door. One pint and a vodka and red bull cost Liz £7.80. Ouch. As normal we headed for JJMoons near Wembley. The pub was packed and a few Scots were there having a laugh. But as usual a few idiots spoilt it. JJMoons is always a very lively pub and when the Scots decided to leave around 6pm all hell broke loose. A few England fans decided to give them a slap but other England fans stepped in to prevent it. A few punches were thrown and that was that, the pub was shut down by the Police. We headed next door to the Post Office and then onto the match. 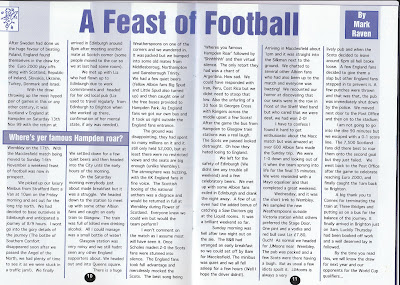 I am not going to go into the dire 90 minutes but we escaped with a 0-1 score line. The 7,500 Scotland fans did there best to roar them onto the second goal but they just failed.

We went back to the Post office after the game to celebrate reaching Euro 2000. We finally caught the 1am back to Brighton, but this terminated at Three bridges and we had to get a bus. It finally arrived in Brighton just on 3am. Luckily Thursday had been booked off work and a well deserved lay in followed. So its 12th December and the draw to look forward to in addition to the World Cup draw (also in December)
Posted by Mark R at 02:07