After Sweden had done us the huge favour of beating Poland, England had made the Euro 2000 play offs with Scotland, Republic of Ireland, Slovakia, Ukraine, Turkey, Denmark and Israel.

So after the draw it was Scotland v England at Hampden on Saturday 13th November with the return at Wembley on the 17th. The Macclesfield v Brighton match had been moved to Sunday 14th November so a weekend feast of football was planned. 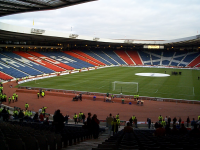 We picked up our ‘luxury’ Minibus from Strafford Rent a Van at 10am on the Friday morning and set out for the long trip north. We had decided to base ourselves in Edinburgh and anticipated a journey of 8/9 hours. I won’t go into the gory details of the journey (The bottle of Southern comfort disappeared soon after we passed the Angle of the North , we had plenty of time to see it as we were stuck in a traffic jam!). We finally arrived in Edinburgh around 8pm after meeting another mate at Scotch corner (some people transferred to the car so we at last had some more room).

We met up with Liz who had flown up to Edinburgh due to work commitments and headed for her old local pub (Liz use to regularly travel from Edinburgh to Brighton when she worked up there, conformation that she was mad if we needed any). We settled down for a few quiet beers and then headed into the City until the early hours of the morning.

On the Saturday morning everybody just about made breakfast but it was a struggle. 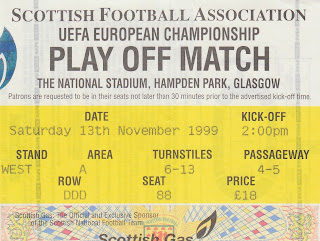 We headed down to the station to meet up with some other Albion fans and caught an early train to Glasgow. The train was full of kilted men drinking alcohol. All I could manage was a small bottle of water! Glasgow station was very noisy and we still hadn’t seen any other England supporters about.

We headed out and into Queens square. There is a massive Weatherspoons on one of the corners and we wandered in . Its was packed but we bumped into some old mates from Middlesborough, Northampton and Gainsborough Trinity. We had a few quiet beers (fellow Albion fans Big Spud and Little Spud also turned up) and then caught one of the free buses provided to Hampden Park. As England fans we got our own bus and it took us to outside the England fans entrance. 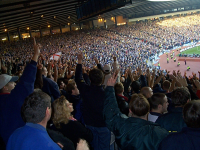 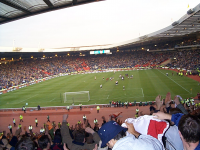 The ground was disappointing, they had spent so many millions on it and it still only held 52,000, but at least there were no restricted views and the seats are big enough (unlike Wembley). The atmosphere was buzzing, the 6,000 England fans in fine voice. The Scottish booing of the national anthem was a disgrace and would be returned in full at Wembley during Flower of Scotland. Everyone knew we could win but would the team perform. I won’t comment on the match as I assume most will have seen it. Once Scholes made it 2-0 the Scots fans were stunned into silence. The England fans took full advantage and mercilessly mocked the Scots. The best song being ‘Where’s you famous Hampden Roar’ followed by Shhhhhhh and then virtual silence. The only retort they had was ‘Argentina’ how sad. We could have responded with Iran, Peru, Cost Rica but we didn’t need to fall that low. Also the unfurling of a 30 foot St George’s Cross with ‘Rangers’ across the middle upset a few Scots! After the game the bus from Hampden to Glasgow train stations was a real laugh. The Scots we passed looked distraught. Oh how they hated loosing to England.

We headed back to the safety of Edinburgh (We didn’t see any trouble all weekend) and a few celebratory beers. We met up with some Albion fans exiled in Edinburgh and celebrated the night away. A few of us even had the added bonus of catching a Saw Doctors gig at the Liquid rooms. It was a brilliant weekend so far.
According to Ian St John in his article in one of the Sunday Scottish rags England fans shouldn't take any pride in our win at Hampden. He said we will be humiliated in Euro 2000, and according to Kevin Gallagher the Scots have nothing to fear at Wembey as they played us off the park! Right after me 'Cheer up Craigy Brown - Oh what can it mean - to a sad scottishb******d and a shite football team'

Sunday morning was hell after two night out on the ale. The B&B had arranged an early breakfast so we could set of by 8am for Macclesfield. The minibus was quiet and we all fell asleep for a few hours (Well I hope the driver didn’t!). We arrived in Macclesfield about 1pm and headed into the Silkman. We chatted to several other Albion fans who had also been up to the match and everyone was buzzing! We had to tell our horror of our seats being in the row in front of the Sheff Wednesday band but who cared that we were deaf, we had won 2-0! I have to confess I found it hard to get enthusiastic about the Macc match but was amazed at over 600 Albion fans made the Sunday trip. We were 1-0 down and looking out of it when the team sprung into life for the final 15 minutes. We were rewarded with a Mayo equaliser and that completed a great weekend.

hello guys, I like your blog is very interesting your subject .... I would like to receive information about this!