A v Finland (and a day trip over to Estonia)

I have been off-line since the Wednesday before Hull. I imagine I have missed many debates regarding Hull City and the crap view, no away terrace behind the goal open, the brilliant result (We won 2-0 away and finsihed the game with just 9 players after having 2 men red carded!). Then the England farce at Wembley (0-1 defeat to Germany), the dull draw in Finland, the signing of Wicks, the drab tactics of Scunthorpe and the news that Darlo and Chesterfield away games are all ticket! How many e-mails did I miss! Plus the news half of Sussex had been turned into a swimming pool. (Lewes even made the papers in Finland!!)Hull was a brilliant trip, we played like a team who knew what they were doing, shame the Hull stewards were clueless! We headed down to Wembley from Doncaster on Saturday morning and despite the showers had a good day until 3pm! England were crap in the first 45 minutes, but much better second half, Beckham was my MOTM. 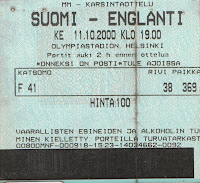 Helsinki. The flight only took

3 hours but with the 2 hour time difference it was around 9pm by the time we had booked into 'The Eurohostel' (Only £12 a night so a bargain in Finland). We were soon in town and managed a few relaxing beers, before heading to a club and finally getting back to the Hostel around 5am! On the Tuesday some headed off for the U21 (2-2 draw) and others stayed around Helsinki. Many familiar faces turned up, lads from Northampton, Gainsborough, Bournemouth, Swindon, Coventry, Sheff Wed/Utd, Rotherham, Brentford, Everton etc etc. The weather wasn't as cold as we expected and talk soon turned to football once the team for the next day was announced. Not toooo many positive comments.


On the Wednesday we drank a bit away from the main drag and shared our beerswith many Finns who were also off to the match. One group had travelled 600km down from

the north of Finland - a 7 hour train trip. They were allpredicting wins for England, we said we would be lucky to score nil! They knew all about the English team as they get live Premier league football,most were Man Utd/Liverpool fans but were amazed they had yet to find a single person who had travelled over who supported either! We headed to the Olympic stadium and once we had found the away end (segregated off and difficult to get to, made the walk to the old away end at Watford looksimple!) We were in a corner in the upper tier and the view was superb 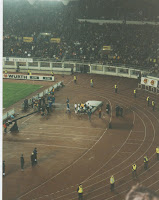 Around 3,500 England fans were in the ground but we were outsung by the33,000 Finns (Suomi (Finland) was the chant all night). The England corner was very quiet until about 15 mins from time when one England lad stripped naked and that suddenly seamed to kick the fans and the game into life. Parlour scored but the ref missed it (the ball hit the bar and clearly crossed the line - but the referee and lino missed it) and that was that. After the game we caught a tram back to the city centre and drowned our sorrows.

On the Thursday we caught the Hydrofoil to Estonia. Apart from the hassle of people attempting to flog cheap watches to you it is a great place. Wefound the famous bar that a Scotland fan had opened. He had gone over for aqualifier a few years back and said he would never return to Scotland.There was a huge tartan army flag at the back of the bar but that was all.He had gone bankrupt and had been driven out of Estonia by the local maffia!!!

We wandered around the old historic town and decided it was time for another drink. We ended up in a Depeche Mode tribute bar. It was sureal, did this place really exist or had we all drunk oursleves stupid!

The boat back that evening was a little rough and not helped by staff handing out sick bags to everyone! We all survived!

We headed home Friday, but before that we had a day in Helsinki. Everything was fairly expensive so we

found an eat as much as you like Chinese buffet. I was stuffed after about 20 pork balls but we certainly ate enough to make it good value for money. We got home in the early hours of Saturday due to train problems.

As for the game (Brighton v Scunthope) 0-0 was a fair reflection of the match. Scuuny Daz was delighted with the fixture and the result, Brighton v Scunthorpe never seams to produce a thriller!! Neither side created much and their negative tactics were very frustrating. The defender taking goal kicks made it look worse (keeper injured the previous week and like Cartwright couldn't kick). I though Kuipers looked solid. We must win Wednesday (H V Hartlepool) to set us up for the big one on Saturday away at Chesterfield .When I went to the ticket office Saturday morning we had sold out the seats(300) and just over 1,050 terrace tickets. Can't wait! 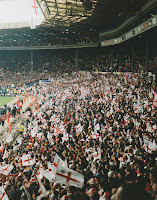 All pictures by Liz O'Brien 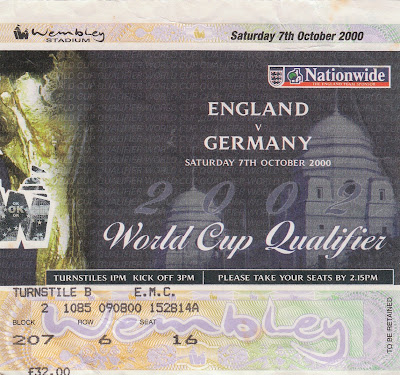 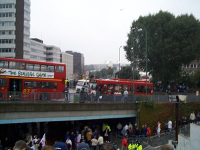 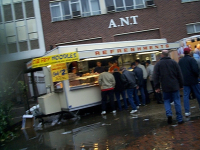 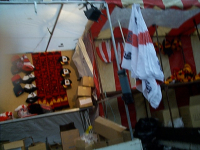 The last ever game at Wembley stadium and boy was it wet! 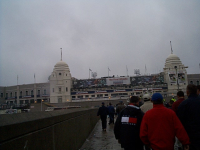 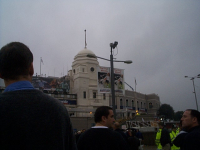 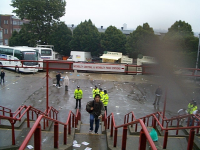 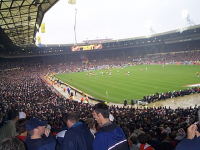 It rained before the game, it rained as the game kick off and it kept on raining.... 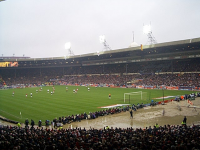 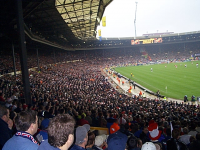 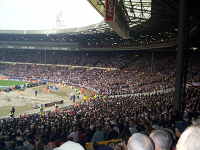 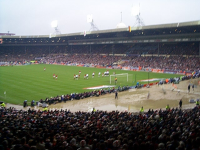 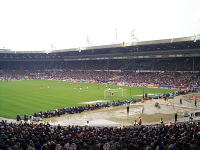 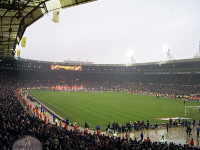 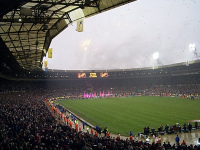 All pictures from 3lionsontour.com
Posted by Mark R at 18:51 No comments: