So England fans had been banned from Macedonia, a dangerous precedent set by our FA in electing not to take up any tickets for this match. Ignoring the ban on Thursday 4th I left work at lunch time, met up with Liz and we were at Gatwick in plenty of time for our 5.30 flight to Thessaloniki. We hoped to keep our heads down and a low profile at Gatwick because the police were swarming around our check in desk! We were of course holiday makers not football fans! As we checked in the lads around us were section 60'd by he Police, we were met with "hello Liz and Mark, I wonder where you are going?" by the Sussex Police that travel to all Brighton away games. He just noted our names down and left it at that with no more questions.
We checked in fine as did the other 30 or so England fans going the same route as us. They were on an organised trip staying in Halkidiki and getting a coach over to Skopje. Our flight going out was delayed by 2 hours and we eventually took off at about 8pm for our 3 ½ hour flight. With the time difference we landed at 1.30am, jumped in a taxi and were soon in our hotel in Parear just outside Thessaloniki and about 5 meters from the beach!

On the Friday we went in nice and early to Thessaloniki station to book our train tickets to Skopje. In front of us was a mate I hadn't seen since being in a curry house in Brussels in Euro2000. We booked up together and for 24 Euros had the trains booked. We headed back into Thessaloniki and went sight seeing. As with many parts of Greece it is full of history and we visited places such as the White tower, many old ruins and of course a couple of bars for some refreshments as it was about 30C.
Saturday and it was up early as the train to Skopje left at 8.04am. We met up with Gary and there were about another dozen or so England fans on the train. We shared our carriage with a Germany and an Israeli student on the way back to Germany, it was going to take then about 40 hours! The train was slow as once outside Thessaloniki it had to change engines twice as it need to change direction! We then had to pass through the Greek passport control and then on to Macedonian passport control and yet another engine change. We had no hassle whatsoever and they even said are you going to football, and just stamped our passport and gave them back.
The journey was just over 4 ½ hours but with the 1 hour time difference arrived just after 11.30am. The train was met by a hoarding mob, not of trouble makers but friendly Macedonians trying to sell us tickets by the hand full and taxi rides. We had arranged to meet our contact to get our tickets (Cheers xxxxxxx as he wishes to remain anonymous, but he was a star and sorted the 3 of us out!). We got a taxi to one of the local hotels and met up with some other mates already out there, Bexhill Steve and his misses plus a few more familiar faces. We changed up some money to the local currency of Denars and settled down for some food and drink.
There was a distinct lack of people about but our bar had a good mixture of England fans and friendly Macedonians. We moved on to have a look round and walked up the river, past the big square where they were putting up a big screen for the match. We were offered so many tickets it made us laugh, so much for no tickets being available! We walked up to the ground to suss it out, then headed back into another quite bar. About 4.30 we decided to head to the ground and joined the long queue to get into the South stand. We asked the Police which
entrance and they told us we were in the right line, and waved us through after checking tickets. In the bar alongside the queue was Everton Tim and some of our West Ham/Chelsea mates. We were soon in the nearly full large South stand. There was a small group at the back of the stand with a Grimsby Town flag and just before kick off some Bolton fans turned up in a group of about 15. Other than that it was a few small groups mixed in with the locals. The Macedonians behind us showed us to our seats and sorted out some confusion over others trying to sit in our seats. We took some pictures of us in the ground and then one Macedonian gave us his flag for Liz and I to hold and he took our picture, it's a cracking photo with the big main stand of fans all hold red and yellow flags as the back drop. Just before kick off about 200 England fans we let in to a segregated section behind the West goal. Another group of about 50 lads arrived in the East terrace and stood at the back with no hassle.
The only incident we saw was when a Macedonian put up an Irish flag with Brits out of Ireland on it. One English lad was upset about this and remonstrated with the locals and before it turned nasty the Police ripped down the flag and disposed of it! The pre-match entertainment was 2 local singers and then we had the sight of the national anthem being started on a grand piano! We have the photos of it being wheeled away at kick off. The Macedonians sang their anthem with pride but a lot around us booed our Anthem. The lady behind us shouted to some booing it to stop and looked at us obviously worried that we might become the centre of attention but we just stood around smiling and laughing and had no hassle at all.
I wont go into the game as it was a while ago now, but my only sad and bitter memory of the trip was the disgraceful racial abuse handed out to Sol Campbell and Emile Heskey. We thought we heard the odd Monkey chant when they warmed up, but when Campbell put in a hard challenge the Monkey chants started again. The w***er next to us was bouncing up and down getting his kids to join in. What a sad ignorant man. We had to bite our tongues, we tried to get some on video as have a digital camera but its not very clear.
Soon after about the 3rd or 4th lot of bad abuse (last lot aimed at Heskey warming up) they made and announcement and we guess it was to ask them to stop monkey chanting as some people around us applauded it. Now what will FIFA/UEFA do about this totally unacceptable behaviour? Nothing of course, but hey lets see if we can throw England out the tournament, and racial abuse, what racial abuse, didn't hear it! The atmosphere was fairly intimidating and as England took over the game second half they mainly sand "F**k you England" or "F**k you Beckham", but he of course had the last laugh netting the winner. The players celebrated each goal and the final whistle with the group behind the west goal. We left at the final whistle with no problems.
The only direct abuse we got was at half time when we went to the toilet. The women’s was full of blokes weeing against the wall and it was pitch black so I went in with Liz. As we came out a little group saw us and shouted out quite originally "F**k you English". We just walked away. After the game we headed back along the river and ran into hundreds returning from the big screen. There was no hint of trouble and we passed a bar with several big screens so settled down to watch Italy v Wales. We met up with Steve again and went for a meal. Gary, Liz and I (along with about 6 other England fans) settled down in the bar for the evening. The local beer w as very nice and at about 80p a pint what more could you ask.
Our train was at 3.25am and we managed to last until 1.30am in the bar before jumping in a cab back to the station. The station buffet was still open so we each had a drink of what they called coffee. It was truly awful and about half way down was a thick black sludge! We left that and gave upwatching bay watch on the TV and settled down in the waiting room for the train. It finally turned up at 4.30am and we joined the local fishermen, a few other England fans and some local youngsters who had been out for the night on the slow trek back to Thessaloniki. We arrived around midday, said our goodbyes to Gary, caught a bus to the airport, flew to Athens and then on to Kos and returned home yesterday in time to see Brighton beat Chesterfield 1-0 last night.

I will not be going to Turkey, but good luck to those that do.

This was the offical line by the British Government
England fans urged to stay away from Euro tie
The Foreign Office is strongly urging England supporters not to travel to Macedonia for the match between Macedonia and England on 6 September.
The FA has not taken up its allocation of tickets for this match. Any fan who gains, or attempts to gain, access to the stadium risks being banned for life from obtaining tickets from the FA.
Those who travel to the match without a ticket will only be able to attempt access to the stadium via unauthorised means, such as the black market or forged tickets. The Macedonian authorities have stated that they will deal very firmly with any fans that misbehave. 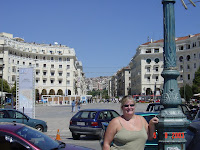 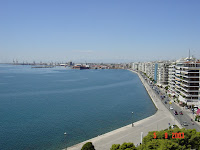 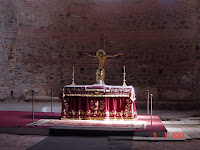 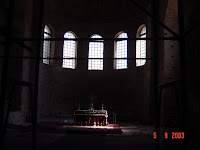 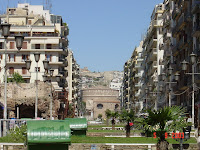 Views from the train from Thessaloniki to Skopje 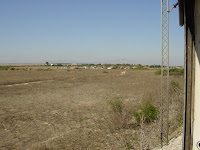 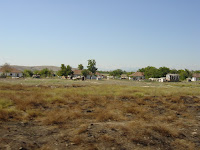 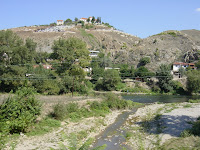 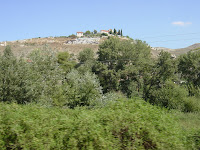 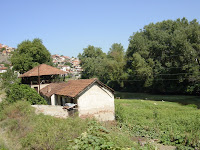 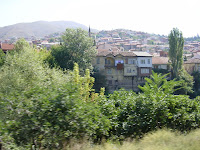 A few more from inside the ground 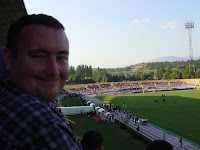 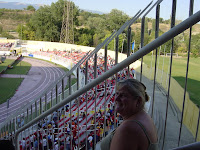 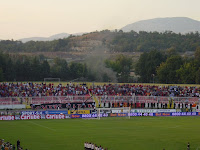 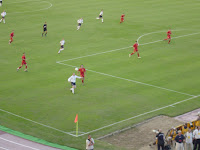 nice blog Mark. The tartan army board members have used your comments to get an understanding of what our trip is going to be like in 2008. Can't wait!!

very good blog mark. off to skopje next week for the scotland game and some good info there.

can I ask why did the FA not take up any tickets?

Was it connected to the England fans or due to Macedonia?

just wondering if there was security issues regarding skopje?

The English FA declined tickets in the 2003 match for "security" reason. That was all they said!

However when we went back for a qualifier in 2006 they did take up tickets.

Macedonia is a great place to visit, loads of great bars next to the river and a short walk from the ground!

This blog is still under construction as still adding reports/pictures so glad its been of assitance already!

Have a fun trip!!

Next week the choice was Skopje to watch Scotland or the Withdean to watch the Iron .... not really a choice seen enough drab games at the Goldstone/Priestfield/Withdean to last a lifetime, looking forward to the next game hopefully at the new ground, you guys have been too long without a proper home