So its Friday morning and Liz and I set off from home to Waterloo to catch the 14.37 Eurostar to Brussels. We met Liz's nieces on arrival for a quick hello, they then jumped on a train with us to get from Brussels Midi to Brussels central as they were away for the weekend so needed to get a train from Central station. Unfortunately they jumped on the wrong train so we ended up in Gent, 30 minutes away, so roughly 70 minutes after meeting them we managed to get from Midi to Central which is about 5 minutes away! They helped us book our train for the next day to Gelsenkirchen. They headed off and we headed to our hotel, and were soon out in St Catherines part of Brussels and in an Italian restaurant. They had about 10 staff working, 8 of whom were watching the football and 2 trying to do all the work! We had a good meal and some nice beers and toasted the Italian win over the Ukraine. As we strolled back to our hotel the Italian residents were out in force, hanging out of cars waving flags and beeping horns. Within the hour the city was in gridlock and the noise of beeping horns incredible! We finally managed to doze of and were soon woken by our 5.45am alarm call.

So it was now Saturday early morning and time to get a taxi to Midi and we were soon on the 6.25am train to Koln (quite a few England fans on board, sitting next to us were our Charlton mates, all a bit worse for wear after deciding on all night bars instead of a hotel!). We arrived into Koln just before 9am and then it was a train to Essen (leaving our bags in left luggage), then a local train to Gelsenkirchen. We arrived about 10am, headed for the ticket exchange point and by 10.30am we had our tickets. We walked back into the city centre and the place was heaving, Gelsenkirchen is small and couldn't really cope with 60,000 thirsty England fans. There is only one tram line to the ground, so we got that,deciding to go two stops past the stadium. We spotted a bar as we headed into the stop, so walked back to that. The owner was a really nice guy and we soon had some cold beer in front of us. We got talking to some local Schalke 04 fans and this was one of the main drinking holes for them. They had set up several TV screens and it was reasonably busy. We sat in the shade, drinking local beer, food from the BBQ they had set up and looked forward to the match.About 3pm we decided it was time to head to the ground. We caught the virtually empty tram back to the ground and queued up and were soon inside and ready for the match. I was behind the goal near the corner flag in with the official England section, Liz was on the half way line towards the back in a neutral(ish!) section. The stadium was fantastic - the closed roof kept it cool to start with but it got hotter and hotter and stickier and stickier as the place filled up. The atmosphere was fantastic around me,non stop singing and the expectation was high.The match - gutted. We had changes, didn't see the Rooney incident, hated the cheating diving Portuguese - I would even wish France to win the tournament rather than them, but as Jon said in his report I will be rooting for the Germans. They have on the whole made us welcome and the locals we spoke to genuinely wanted a Germany v England final. The penalty shoot out was painful - my record now reads
WC Semi final 1990 v West Germany - LOST 3-4
EC 1/4 final 1996 v Spain - WON 4-2
EC Semi final 1996 v Germany - LOST 5-6
WC 1/4 final 2002 v Argentina - LOST 3-4
EC 1/4 final 2004 v Portugal - LOST 5-6
and now another defeat, even worse than the other defeats 1-3 on penalties!!. We battled to hard to get to penalties, then went to bits and always looked like losing. I left after the final penalty, the Germans outside looked almost as gutted as us. I sat down on the concourse and waited for Liz. We then headed back to the bar we had been to before the game, had a quick drink,said our goodbyes and headed back to Essen on the tram and metro to avoid having to back into Gelsenkirchen main station. We got back to Essen, taxi to our hotel and then had a great meal and a few final cold beers and sat sort of bemused and disappointed by the defeat.

Sunday morning and another early start. A taxi to the station then a train to Koln then a train to Brussels and Eurostar home. We left the hotel at 7.15am and got indoors about 8pm. We had 4 hours in Brussels, ventured to the huge marked outside Midi station and then had more food and drink (mmm that theme seams to come up quite a lot) Anyway what next for England. I am glad to see Sven go, this squad should have been playing attacking adventurous football, then we might be heading to Munich and Berlin.

Picture from my mobile phone 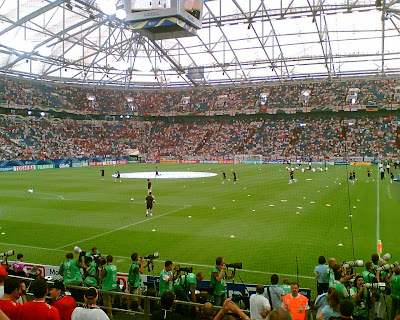