After beating Wales 2-0 at Old Trafford we were looking forward to our trip to Azerbaijan. We were booked on the 365EnglandFans trip, arranged with our mate who 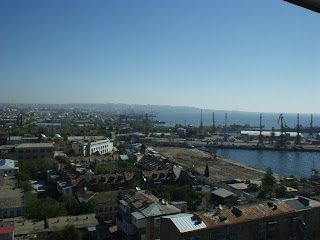 runs the site, using Red Arrow travel (based in Cardiff) who had the experience as they had taken Welsh support to Baku twice in the last few years. It was a nice early start as we had to be at Gatwick for 7am. We checked in and met our mates in the bar once we had been through passport control. I imagine that 90% of our flight were in

the same bar, but by 9am everyone was on board our Monarch flight to Baku. The flight was approximately 5 hours but adding on the +4 hours time difference and it was about 6.30 when wearrived (not 5.30 as the Captain on the plane told everyone!).
We were soon through passport control as everyone had visas and were soon on the bus to the Hotel Absheron, near the harbour. Opposite the hotel was a Governmental Palace, and it was only a 5 minute taxi race or 10 minute walk to the old town and also fountain square which had loads of bars and places to eat.The local currency is the Manat and it was £1 = 8,500 manats, or $1 = 4,900. Once we had checked in it was time to sample the local beer. It was 8000 manat in the hotel bar, and it was very nice, called Xirdalan (Castel Brewery). We drunk up and heading to Fountain square. The taxi ride was great fun. The taxis we jumped into raced each other and our Lada screamed home first, narrowly avoiding cars, people and lampposts! The first bar we visited was a local bar and it cost 18,000 manat for 3 beers, 2 vodkas, a coke and a lemonade! The same round in O'Malleys in Nizami street cost 67,000 manat, so after that we wandered round the many bars round the square . We ended up in one about 1am very hungry. We spoke to the bloke at the bar who appeared to be a bit of a negotiator, he managed to catch the chef who was half way out the door and agree on 5 steaks for 25,000 manats each. We agreed and when 5 kebabs turned up 10 minutes later we happilytucked in thinking well they are sort of steaks! Just as we finished the steaks arrived!!!! So being hungry we ate up. We had to pay an extra 10,000 Manats for the Kebab as apparently we had negotiated with 2 differentpeople so got 2 lots of food! Liz and I left about 2.30am to retire to bed, our mates rolled in at about 5am and left the Hotel bar at 6am (it turned out to be a 24 hour bar in the hotel!)


Tuesday morning and we went on the sightseeing tour arranged through Red Arrow. The coach was a bit of a wreck we went through the Apsheron Peninsula passing the Oilfields that featured in James Bond's "The World is Not Enough". Then it was on to the petroglyphs of Gobustan which were discovered accidentally by quarry workers in the 1930s. The 4,000 inscriptions

date back 12,000 years. Another interesting feature was theGaval-Dashy, a resonant stone that rings like a gong when struck. Next the coach drove us off road again to the mud volcanoes.

They were amazing, bubbling mud, occasionally shooting out molten mud, which was cold!!! There were about a dozen active mud volcanoes and one lad managed to slip in the mud and we all rushed to his aid rather than all standing laughing at him ofcourse!!.
Our next visit was supposed to be to a fire temple (or something similar) but as soon as we left the petrol station the coach gradually got slower and slower before grinding to a halt. We were about 60km from Bakuand it was about 2.30. We wanted to got to the U21's and the coach looked unlikely to get going. Somebody flagged down a passing coach and we all piled aboard. The 2 dodgy blokes running our trip tried to stop us getting on, telling us the coach was going nowhere near Baku. The two local ladies on the coach told us it was! We took our chances and remained on the coach. It

did go to Baku and 30p later he dropped us back into Baku. It was then a 80p taxi ride and we were back at out

Hotel. Soon we were back in the lobby and jumped in a cab with 2 West Ham lads to go to the U21 match. We paid 100,000 manats and had the taxi wait for us atthe ground. It was about 25 minutes away and the match tickets cost 3,000 manats and we joined the other 200+ England fans in the corner. The game had been moved to the Ismet Gabiyov Stadium , we passed the original venue and there were loads of people milling about, probably more than turned up at the right venue! We went mainly as 2 Brighton players were in the squad. Dan Harding played the 90 minutes at left back and had a reasonably sound game. Hinshelwood didn't make it off the bench. The game was a dire 0-0 draw. We headed back into Fountain square (our taxi once again beat the Rochdale lads into the square with some neat manoeuvres driving on the wrong side of the road and plenty of honking his horn. Our drive was about 90years old but turned into a lunatic once he had turned the ignition key) and our mate Piers met up with an old mate who has lived and worked (for BP) in Baku for the last 4 years. The deep fried pasta start was interesting and we had another great night out visiting a few more expat bars.


Wednesday morning and we got up late and after breakfast bought 2 new Kodak films for about a £1 each and headed to the old town. We started by climbing the Maidens Tower, and as the weather had dramatically changed from getting sun burnt the day

of the tower and take pictures. We bumped into 2 more lads from Brighton in the tower. Next we wandered round the walls off the old city, took some photos of an old mosque, had a look at the enormous statue of Nizami at the back of Fountain Square, before heading into the shelter of a bar. More and more England fans turned up and the bar was soon heaving. We got back to out Hotel to get the coaches to the ground at 7pm.

The ground is called the Tofiq Bahramov Stadium, after the linesman who gave the goal over the line in out 1966 world cup win. He is a bit of a local hero! We were in the corner block with the win and rain lashing into our faces and it was freezing. 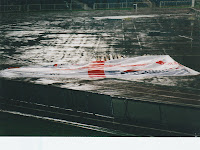 I imagine most people saw the match so wont comment other than 3 points were welcome, I guess that's all that matters.

All the tales off hassle getting into the ground provedunfounded and it was just as easy getting away back to the coaches afterwards. We hit the hotel bar when we got back (about 12.30 due to the stupid kick off time)We finally got to bed about 2am and it was a struggle to be up for 8am as the coaches left for the airport at 9am. Overall Azerbaijan was a very friendly welcoming place. It relies on oil (and beer sales!), and apparently corruption is high in all business life (and the local police like the odd $ of the ex pats as well!). So another fantastic away trip, Wales and NI to go 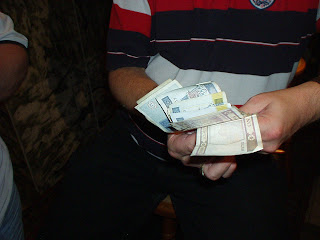 ....hehehe I have money, loads of money, its what makes Azerbaijan go round.... 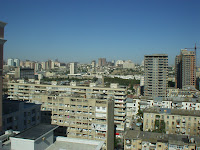 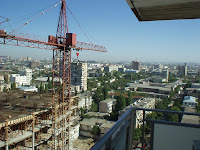 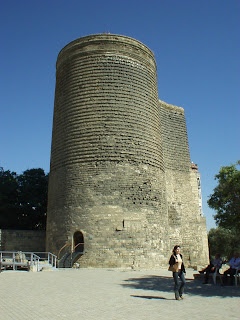 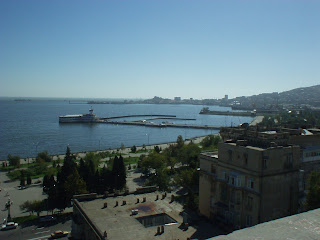 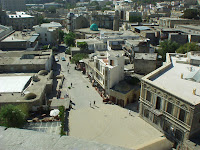 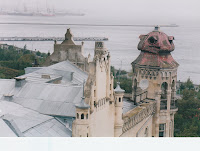 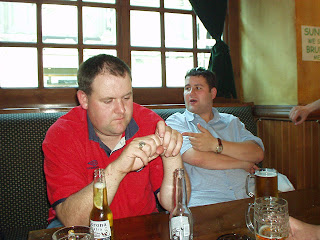 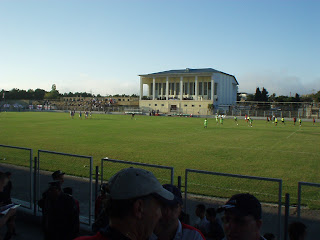 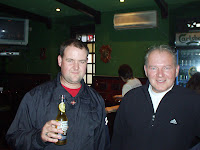 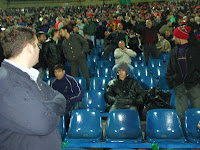 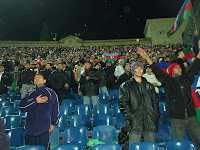 But now its match day and its not sunny, well its not even just cloudy, its very very wet and extremely windy...... 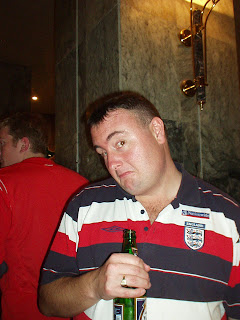 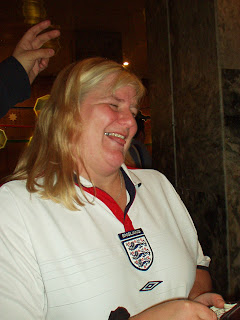