After finally getting confirmation just after 1pm that the Brighton match was off, Phil Blackman and I embarked on the mission to find 3 tickets for Anfield to get our weekend fix of beer and football. By 7pm we had 3 match tickets (approx £45 each) and train tickets from London to Liverpool for just £19. Those that had booked earlier in the week paid £45 but Virgin ran some additional trains on 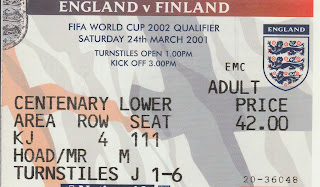 Saturday (especially for the football) so released additional cheap tickets!I set off at 5.45am from Aldrington as normal and arrived at Euston around7.30. I bumped into some Spurs fans we first met in Sweden in Euro '92, one of them had to suffer sharing a tent with me and the Fatty Taxman, but amazingly they still remains mates 9 years on! We headed for a café and then met up with a very 'Green' looking Phil Blackman about 8.30. Phil encountered problem number 1, they did have any tickets for him to collect(I will let him explain) but he ended up with a scrappy note from the travel office saying he was allowed to travel to Liverpool!We stocked up with some cans of cider and Phil sort of turned an even stranger colour and asked us to keep the smell of alcohol away from him. Due to Engineering works the 9.10 from Euston crawled into Liverpool Lime Street at 13.08. I had to meet a mate of a mate to get my match ticket, and it turned out to be a lad we see all round Europe and its was the annoying Palace fan. (Well we call him something different but as kids may read this will refrain from further comment!). We walked past a kebab shop and I heard my name called and it was the Gainsborough Trinity lads. One had just come back from Sri Lanka and was on a real high. He had been to the last text match in India and the final 2 in Sri Lanka so had seen three wins on the trot!! This bloke spends more time abroad then me and the Fatty Taxman put together!!!! Soon after Andy S and Kev K from the list arrived in 'The Liffe' pub and we settled down for a few beers and swapped ideas of how to get to the ground, the queue for taxis at Lime Street were fairly long!! We couldn't decide so had another beer to think about it!The Police were on overkill as usual and there were hundreds of them about.We met up with a Cov mate and also the Scunny lad that has won quite a bit of dosh of f the Fatty Taxman as we have failed to beat them this season! We started the long walk to the ground about 2.15 but luckily caught a cab after walking for about 5 minutes. It dropped us near the ground and we saw the Northampton lads we usually meet. They had played away at Oldham on Friday night, so had gone up to Liverpool Friday morning. They had such a good time (and so many beers) they forgot to go to Oldham, but they were not that bothered (they lost 2-1)!

Phil and Piers were on the Kop, but I was 4th row in the Centenary stand, and I had a brilliant view and it was strange being so close to a pitch compared to Withdean. Anfield looks small and to get 44,000 into it they restrict the leg room! McManaman (sp?) had an excellent game and he also had great banter with the crowd. Despite being at Anfield the majority of people around us were from London and the South plus quite a few Man Utd fans. All the Man Utd players got a great reception and Andy Cole was the only one to get stick but that was for his dire 2nd half display, not the fact he was Man Utd. The atmosphere was superb, and I'm starting to enjoy the England trips to different parts of the country. Last week we booked up tickets for the Albania/Greece home games at St James Park (Newcastle) and Old Trafford. There are also friendly matches confirmed for Derby, Spurs and Leeds so we will get to see some of the new improved Premiership stadiums.I wont comment on the match as most of you will have seen it, but for 45mins England struggled but once Owen had scored England took over. Beckham scored a cracker, but Litmenan (sp?) missed a sitter in the last few minutes. (My only complaint of the whole day was the fact the Centenary stand ran out of food at 3.10!!!)

After the final whistle we met up in a pub near the ground (bumped into the nutty Hull boys and the even madder Brentford lad who lives in Haywards Heath!) waited for the crowds to go and then caught a bus back to the City centre. We had a quick beer, raided the off-licence and then caught the 18.45 from Liverpool, well some of us did. Two were left behind as the train left 5 minutes early. Phil, Piers and I had to stand until after Runcorn and had the pleasure of the Merseyside constabulary for company in the area between compartments. We generously offered them some cans of beer but as they were working they couldn't indulge, shame!! On the train there were a few Orient, Millwall, West Ham and Sarfend. The Sarfend fan was so full of bull***t it was funny. He reckons we didn't take that many first game of the season, and we shouldn't believe the crowd printed in our programme.We got back into London 4 hours later and I think I got home around 1.30.Spent last night packing, ready for out trip to Albania which starts tonight with a 22.05 flight to Athens, hopefully connecting with a 5.30am flight onto Tirana. Who knows what will happen after that! If we get kidnapped can I enter a reserve prediction for the Seagulls Fantasy League of 2-1 Albion win every match Zamora to score crowd 6,600!!!If I get an emergency phone call I will phone in my cup semi-final prediction as well!!!!!!!!!!!!!