Where do I start!

We left Heathrow on the 22.05 flight on the Monday evening, arrived in Athens 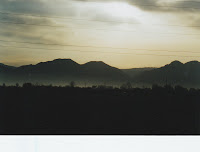 airport at 4am local time (first problem was adjusting watches, just changed for BST last Sunday, forward 2 hours for Greece, then back an hour for Albania, I think!). The connecting flight to Albania was due at 5.30am but was delayed due to weather, or lack of weather. Athens received no weather information from Tirana so wouldn't let the plane leave! It finally did around 6.30am and we arrived into Tirana about 1 ½ hours later.

On arrival into Albania you have to complete entry and

exit visas and then pay a $10 entry tax. The poor woman had to write out individual receipts using a 100 year old bit of carbon paper!! It took about an hour for everyone on the flight to get through. The building was primitive and that was a taster of things to come. The taxi drivers were clambering to get our business and we sorted it with a bloke inside the airport and we were off. It cost us 25$ and considering the average wage is $22 per month, shows why they so eager! The taxi journey was interesting and as Jason said he wasn't sure which side of the road 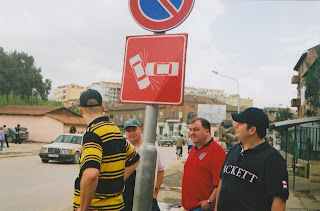 they actually drive on, we decided it was the ones without the huge pot holes. As we approached the outskirts

of Tirana the roads became worse and everything was dusty and there were loads of people just hanging around the side of the roads appearing to be doing nothing. The main congestion on the roads was at junctions as there are no traffic lights or road markings. The taxis compete with people, horse and carts and the vehicles that you use to see in the old

Pink Panther (Peter Sellers- not the cartoon) movies, and also old bicycles with large baskets on the front. At this stage I think we were wondering what we had let ourselves in for.We arrived at the Hotel and what a result. We were paying $90 a twin room,but it was worth it. It was one of the best hotels we have stayed in on our many trips abroad following England. We left our luggage in reception and headed out as we couldn't check in until midday and it was only 8.30am.There was a bar over the road and we ventured in. We ordered a few cokes and an early morning beer. We dug out a map we had to try and work out where things were and we soon had different people coming over and trying to help us out. English is the second language of Albania (map reading is NOT!).Everyone was really friendly and interesting, and chatted to us in broken English. Once again this set the tone for the trip, they were fascinated in 'Westerners' as much as we were in the stark contrast of living in a country such as Albania compared to most of Europe.At midday we returned to the Hotel checked in showered and then headed out for the U21 match. We got to the alleged venue, a stadium ready to collapse at any moment. Apparently the team arrived and they didn't

even let the players get out and refused to play there so it was moved to the same venueas the main game the next day. We arrived about 3.10 eventually queued up and got our 300 Lev ticket (About £1.50) and headed in. The ground was basic but we had a roof for this match which was lucky as it was chucking it down. There were probably as many watching the match from building sites as in the ground. England dug out a 1-0 win (Greening penalty - I think!). After the game we met up with Ashford Steve (Brighton fan), Scunny Daz, Scunny Mark and careful Colin the

Birmingham City fan. We passed a supposed Irish bar so headed in and had a beer or two. We basically went on a bar 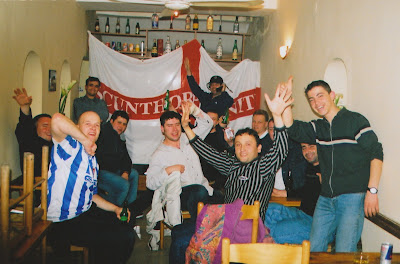 crawl of Tirana and it was superb. We met some Stoke, Birmingham, Villa and Doncaster fans in a nightclub bar but went into a smaller bar around 11pm and discovered that bars were being shut on Police advice due to the reputation of England fans. The bar owners saw that everyone about was genuine and they all served us! The last bar we were in was the tops. The owner pulled down the shutters and we were in for as long as we wanted. I think it was 2/3am when we left as some of us had been up from 6.30am Monday morning and it was now 3am Wednesday morning with no sleep! We had no ideawhere the hotel was but set off determined to get back and 20 minutes later found ourselves back where we had just left! We did (eventually) find the hotel and crashed out


Wednesday morning was a struggle. I had to get up to do a Radio slot for Southern Counties Radio, and then we wandered into town again. Most Englandfans for this trip had come on organised day trips, they missed out on a place that had not a lot to offer, but everyone made us feel really welcomeand it was one of the best trips I have been on. A few local school kids decided to throw stones at us at one stage but a local Albanian chased them off and apologised!We headed for the ground around 7pm 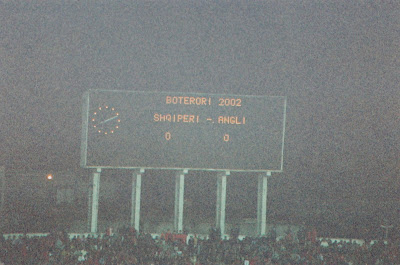 and the organisation was dreadful. They had moved the section for England fans and it was chaos getting in. There were baton wielding Police keeping (we think) ticketless Albanian fans out the

stadium. We got in without showing ticket and the alleged reserved England section was full of Albanians! There were approximately 1,500 England fans at the match and room left for about 600. The only hassle we saw all the time we were in Albania from England fans was during the first 10 minutes of the game as they attempted to wedge us all in the top corner.A lot of people had had enough and stood in the other part of the top section that should have been reserved for us anyway. The few hundred Albanians in that section were soon moved out and we at last had some room.The atmosphere was good and the first half poor in football terms. At this point I should also mention that the ground had no toilet facilities - niceone!!!! I imagine most people saw the game, but we scrapped a 3-1 win. 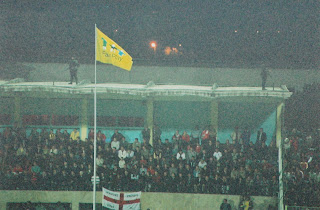 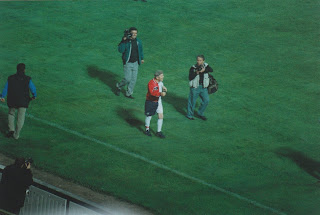 NORMAN WISDON - seen as a comic genious and a bit of a hero in Albania!!


After the final whistle it was the only nasty bit of the trip. The local thugs were

away end from outside with catapults. At first the Police did nothing but eventually armed up and chased them off. They held us in for 20 minutes or so and most people disappeared back onto coaches to go back to the airport. There was a group of about 20 of us wandering into town and we did get a few verbals from a few people
but safely got back into a bar the Scunny lads had been in before the march.We settled down, exhausted for the last few days and had a 'few' relaxing beers.

Thursday we had a 9.45am flight back to Thessaloniki and that was where it went wrong. We were supposed to fly back straight to Gatwick but last week they told us the flight was cancelled so had booked us a hotel and would fly us out Friday afternoon. When we checked in they told us that was wrong and we had to fly from Tirana to Thessaloniki to Athens to Heathrow. 9.45-12.05 13.10-14.05 19.10-21.10 (our time). Unfortunately for us Thursday was the day that the brand new airport in Athens opened. The building opened ok but none of the computer links etc etc

worked!!! We were delayed for 3 hours in Thessaloniki and when we got to Athens it was chaos. They lost our plane(true) and found it 3 hours later! When we arrived into Heathrow at 23.15 they then announced that the plane had no luggage on board! It turned out that all flights that left Athens yesterday had no luggage. We had to fillin a claim form and they will be sent by courier back to us when they eventually get back to Heathrow!!! By then it was nearly midnight as some of our lot were going back to Lewes and Worthing missed the last train. We went to the Olympic air desk but they had all gone home and would be back at6.20am. BAA attempted to help us out but they could make no contact with Olympic so we got a taxi home and will make a claim today! So we set off from our Hotel in Albania at 6.30am (UK time) and arrived at 23.15pm (uk time) too many hours for me! Sods law - the next England away match is Greece in Athens, perhaps we can collect our bags then, if they can find them!

Update
The good news is our luggage turned up yesterday and was delivered by courier. The Fatty Taxman had his luggage delivered to his local pub!!!!!!!!!!!Brighton are 2nd in the league, England just won 2 matches on the trot, so I wasn't worried about delayed luggage, but drinking more beer does help! 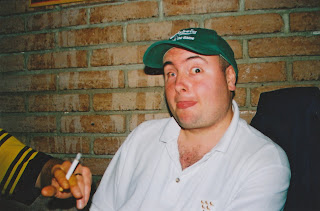