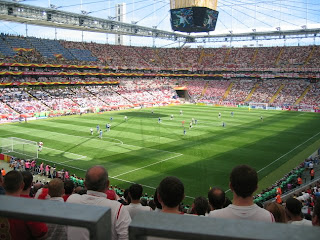 To save holiday for possibly the later stages, Euro qualifiers and other holidays, Liz and I ventured to Frankfurt on a day trip. Friday was a bad day as Liz got stuck on the M25 after a lorry overturned, caught fire and set light to one of the road gantries, hence a trip from near Swindon to home took 7 1/2 hours, so I was home before her, so our plans were already being snookered! Watched the end of the Germany game, I watched Poland surrender to Ecuador and then it was time for bed and a couple of hours sleep as we needed to be at Gatwick for 2.30am. 2am Saturday morning and the alarm clock wakes us up from our slumbers. In auto pilot mode and Liz drives us to the airport, we park up, walk to the terminal and check in. Bump into Ian Green the Albion club shop manager (and old school friend!). At 4am it was time to board the plane, soon the plane was full, we took off, I fell asleep to 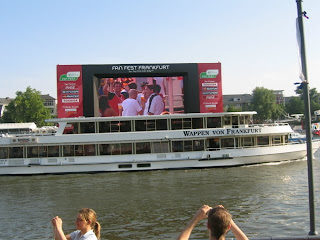 be woken up by a flight announcement to fall asleep to be woken up for breakfast, to fall asleep and to be woken up by landing!!! It was about 6.30am, so a reasonably early arrival into Frankfurt. They have a special world cup terminal, so loads of people to check passports and within a few minutes were out the other end to the coaches waiting to take us to the ground. The plan was for us to be dropped at the stadium, get a tram into town, but of course this wasn't going to happen. The coaches (4) turned up at the ground, to be turned away, so they drove us into the city centre and dropped us by the main station at about 7.30am. The coaches would be back at the station at 9.30pm to take us back to the airport, so we had plenty of time after the game as well, which was good news.

Liz and I ventured for a large cup of coffee to wake us up. We then headed to the fans village set up on the banks of the river Main, there were plenty of bars, a big wheel and various official merchandise stalls, all very well organised. We strolled 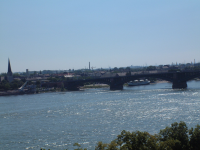 down the river in the blistering heat (this was still early morning so new the players were in for a tough time), we stopped at the big screens, in the middle of the river Main, with lots of 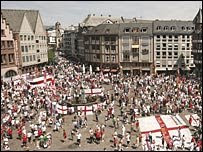 stands erected on the river banks, great great idea as most ticketless fans opted for this rather than line the pockets of the touts. We went into the big main square for a quick drink, and watch the usual kicking the ball round the square larking about. We decided on a river boat trip, so sitting on deck taking in the rays, with nice ice cold beer and frankfurter and chips. By now it was about 11.30 and at about 12.20 our boat went past the big screen. There were some Polish lads and a few other England fans on the boat, so we stood up and applauded the 20,000+ England fans already seated by the screens, they in turn stood up on mass and gave us a few renditions of Engerland Engerland Engerland. Great stuff, it was a real party atmosphere. The local beer was very tasty, I think all we drank was brewed in Frankfurt.

At 1.15pm we decided it was time to head to the ground. We tried to phone/text people to meet up but my messages kept failing as network busy, which was a shame. 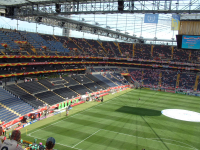 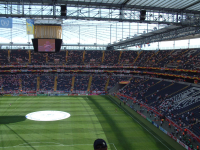 We walked back the train station, caught a free tram (free to all with match tickets) and it was a very slow and hot trip taking about half an hour. By the time we walked to the stadium from the tram stop, queued to get in, queued to get a cold drink, it was 2.30pm so time to find our seats. We were in block 37H, which was about 2/3rds of the way back in the upper tier behind the goal. There was a Hastings Albion flag as we walked in, but we didn't see anyone we knew. The atmosphere was cracking, we guessed at around 25,000 England in the ground, compared to 5,000 from Paraguay in the far corner from us. The heat was fairly oppressive, but that was forgotten as we sung the National anthem, stood quietly for the Paraguay upbeat anthem, then celebrated as England went 1 up in 3 minutes. I expect most saw the game, but couldn't appreciate the heat. It was scrappy, but who cares, we won the opening match, when did we last do that? 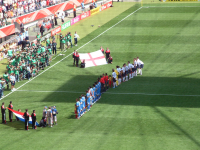 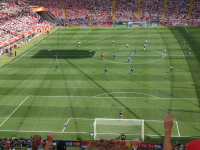 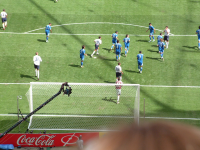 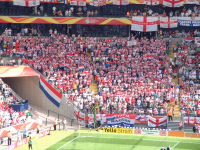 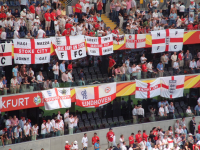 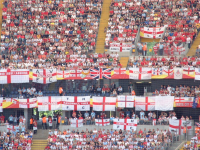 A colourful stadium in Frankfurt! 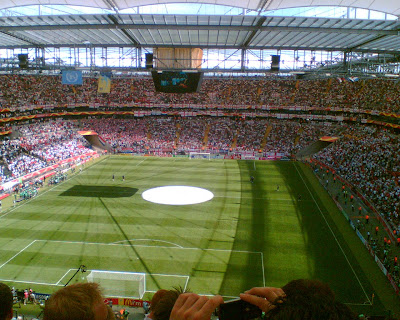