We landed home on the Tuesday afternoon from Israel and headed home from Heathrow. No spare

times as the very next day we were on to Barcelona for the Andorra match. We left home at 6am for a 6.30am check in at Gatwick for the Thomas Cook day trip. We landed just after 11.30am and just after midday were at the bottom of Las Ramblas, the main street through old Barcelona. We met up 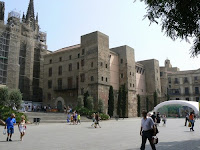 with a few mates and settled down for an early beer whilst we considered our options for the day. The game didn't kick off until 9pm local time so we had a few hours ahead. We walked up to the main Cathedral (La Seu in the Gothic part of the old town) and then hoped into a taxi and onto the world famous Sagrada Familia(a new Church being built to the design by Gaudí). Its a quite stunning bit of architecture and construction. It was started 125 years ago and they reckon a few more years yet before completion. It is 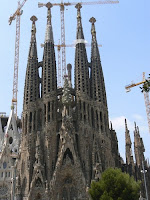 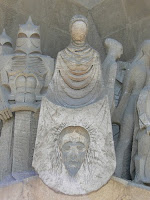 massive, the main tower will be 173 feet

high when finished. The recently constructed stain glass windows are stunning. After that it was back towards the Gothic area and time for some food and drinks. We found a local restaurant and tucked into some great food and wine. We then headed back towards Las Ramblas and another bar before getting our coach at 7pm to the Olympic Stadium (home of Espanyol).

The ground is a concrete bowl with very little cover, luckily is was pouring with rain and a howling gale so just like Withdean. The weather had been bad all day which meant all boat trips and the cable cars had been suspended so a few touristy activities curtailed. The match - well 12,000 England fans on the players back from the kick off didn't help. Ok booing at half time but it pi**ed me off when people just booed and shouted abuse during the match. Yes we were very poor again but thank god for Steven Gerrard. 2 great goals and a vital 3 points secured.After the game it was straight back to the airport and out 00.30 flight back to Gatwick. By the time we had landed, they had got the steps up to the plane and we had gone through passport control it was 2.40am. 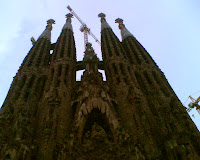 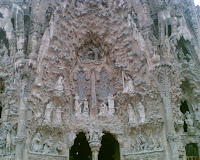 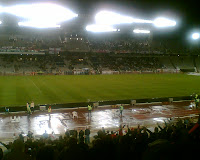 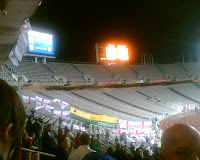 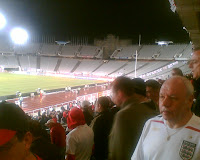 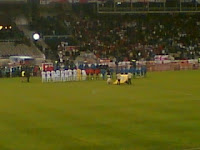