A v Germany 1.9.2001 Due to our obscene take off time of 7.30am from Stansted on the Wednesday morning our trip started by staying at a Phil Blackmans house in Crouch end on Tuesday evening. For those that know the Fatty Taxman it was scary towalk into a pub and the first song on the duke box to blast out was Tiffany!Ahhhh! Was it time to turn round and go home already! At closing time 5 of us piled into Phil's Fiesta and headed home, but due to 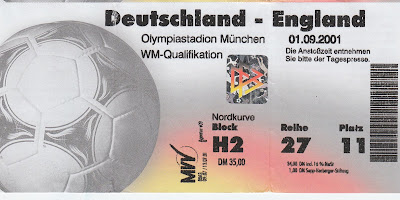 excessive weight in the car the sparks were soon flying, not caused by arguments over Phi's driving but by the exhaust dragged on the road. We made it back but had to revise plans to drive to Stansted.

Wednesday 29th August
Phil dropped 2 of us off at Tottenham Hale station and we caught the 5.11 toStansted. Phil drove the rest up and we met up at the airport, met up with Kev K and his other half Ceri. We checked in and were soon on our way to Prague. We landed just after 10.30, jumped in a minibus-taxi and headed for our luxury apartment! From the outside it looked rough, the reception looked worse, the corridor dreary, but luckily the rooms had beds in. At £4.50 a night what did we expect. The Hostel was next to the National Stadium and once we had worked out our bearings there was a cable car (venicular I think they call it) into Prague centre so you were only 15 minutes away from the main places!We ventured into the City and I have to say that Prague is one of the best places I have visited. It has culture, history and cracking places to eat and drink! We hit some local bars and at one stage paid 85Korun for 5 beers. As its 50Korun to the £ , that's 34p a pint! Heaven! Pete and Phil took in more culture and took in a show (well they just had a quick peep at it if you know what I mean!!)

Thursday 30th August
A hot sunny day and time for some site seeing. We ventured to the famous Charles Bridge, Prague Castle and walked round the old town. Some stayed to see the famous clock, where on the hour it burst into life. (That's what the guide book said - in reality a figure stutters out, turns round a few times and goes back in leaving people slight bemused as to whether that was all they had waited to see!) I am sad to say I missed it as at the time we found a sports bar and watched the end of the Sussex v Lancashire day/night match on sky! It didn't last long as Sussex bowled them all out for under a hundred. During the day we also found a restaurant off the beaten track and had asuperb traditional Czech meal. Dumplings, duck, meats, red and white cabbage and of course one or two of the local brewed beers. We had a three course meal for less than £10

Friday 31st August
Rain - heavy rain, yet more rain. It poured down all day, so we were forced to stay indoors, luckily it was a bar so we managed to survive. We headed towards the station and after a pizza caught the 22.08 overnight train toMunich. This cost just £56 including a couchette.

Saturday 1st September
2am and everyone woken up by a cheerful, jolly Czech border control guard.2.01am in stomps the grouchy German police and border control. 2.02am backto sleep. We arrived into Munich at 6.30am and met fellow Brighton fan 'Snips' at the station. He had just arrived on the overnight train from Brussels, along with about 70+ other England fan. Every train that arrived into Munich had England fans on board, and you could tell we would have thousands at the match. We couldn't check into our Hotel until midday so went looking for some breakfast. We ended up in a beer hall near the Marienplatz. This was only a small one as held around 500 people, but we had a plate of sausage and sauerkraut and a beer, but as it was only just 9am was a bit of a struggle. The Germans already in the bar didn't have the same problem and they were all sinking beer after beer as if they were afraid it would run out! There were also 1 or 2 slightly dodgy looking people in the bar, who spent the whole time on mobile phones and eventually they met up with a couple of England fans. They had obviously never met and god knows what they were arranging! It was no surprise to find that the trouble later that day centred round that beer hall! After we had checked in we had a walk around, but there were small groups of lads about all over the place so decided to head towards the ground and the beer tents. We met up with Peter Jackson who had flown over from the FarEast and managed to persuade him to have a few beers with us! We met up with a few other Brighton lads at the tents and settled down for a good sing song, and of course a few beers. The place was soon heaving and the atmosphere good. It was a slight risk serving beer in proper glasses and serving food with stake knives, but apart from one small scuffle everythingremained good natured.We headed to the entrance about 6.30 and there were no ticket checks, no segregated entrance for England fans and not a policeman in site. We got in and you could walk round the whole ground. We were in block H2 which started off being next to an empty block then the neutral fans section. By kick off time it was a see of red and white and St George's flags all overthe place. England fans from all over the ground headed for the cornerblock and one poor policeman trying to stop it. At first he blocked the front walk way so people headed up a row or two of seats then climbed the small fence. He rushed up to stop them, so everyone at the front climbed over, so of course he dashed back down to stop that. To everyone's amusement this went on for about 20 minutes, he wouldn't give up and must have gone upand down the aisle about 50 times but failed to stop a single fan coming to join the other England fans. There must have been a good 15,000 England in the ground and the atmosphere generated brilliant. I won't go into the game as I imagine everyone saw it. When Gerrard scored on the stroke of half time the England fans started partying, and it was unreal. Shearer in theSky commentary box got a few songs, and once the second half started and Owen made it 3-1 it turned into the best England matches I have seen alongside beating Holland 4-1 in Euro 96 and the Argentine match in France. People couldn't believe what they were watching and everyone mercilessly mocked the German fans. 'Are you Scotland in disguise' and '5-1 to theIn-ger-lund' echoed round the Olympic Stadium and we also reclaimed 'Footballs Coming Home'. At the final whistle nobody could really believe it.

On the concourse outside there were thousands of singing celebrating slightly stunned England fans. The Germans appeared to have all gone home!No being kept in this time so it was straight on the Underground and back towards our Hotel. We found a pizza place open selling beer so settled down for a few celebratory beers. At first it was all fairly quiet as everyone was still trying to believe that we had just beaten the Germans 5-1 in Munich! Once the Pizza place closed we moved on to the bar next door and had a good old sing song with the other England fans (Mainly Portsmouth). It was an evening that you wanted to last forever!

Sunday 2nd September
At breakfast everyone was soon buzzing again. Plenty of sauerkraut's about on the other tables, the few occupied by the English were slightly more upbeat!! We tried to thing of 5 good reasons why!!We checked out and headed back to Prague. We had a 2 hour stop over in Nuremberg, and what we saw of it looked a nice place. We then had 5 hours to Prague and basically drank the buffet dry as we once again celebrated and relived the match the day before. The Fatty Taxman spent more time reminiscing about channel 43 in the hotel room!!! Once back in Prague it was like being back home and we soon settled back to the bars and cheap beer. We had a cracking Chinese meal for £8 and retired to bed some time later on.
Monday 3rd September
The day dragged a bit as our flight was not until 21.45 but we managed to while away the hours until the flight back to stansted. I finally arrived back at home in Hove at 2.45 and my alarm went off for work at 6.30am! Ouch. Better do some work now as off up to Newcastle tomorrow