Once again the England fixture was arranged so that it fitted in perfectly with the Albion match. England vs Belgium at the stadium of light the day after the long trek North to Carlisle for the Albion match. We left Hove at 4am on Saturday morning and had one pick up in North London (I bet we couldn’t find Stoke Newington again!) and the second in Warwick. We arrived in Carlisle just before 12 o’clock, dumped our stuff in the B&B and then headed into town. We met the first train into Carlisle from London and there must have been 100 Albion fans on it. Amazing! We headed into the Caledonian and with Guinness at 3 for the price of 2 we got stuck into the beers. We headed up to the Rugby club next door to the ground to watch the first half of the Sweden v Poland match. I couldn’t watch. We headed to the ground just in time for kick off and the 500+ Albion fans once again were very vocal. Carlisle were the worst team I have seen for a long time and we dominated the match from start to finish. During the first half the first celebration was the news that Sweden had taken the lead against Poland. During half time we heard news of the second goal and England were into the Euro 2000 play offs. Yes!!!! In the second half Warren Aspinall was excellent and he used his footballing brain to be in place to intercept a back pass. He deftly chipped the keeper and immediately made a bee line towards the Albion fans. He slid about 10 yards on his backside (I bet the pitch is still scared to this day) and everyone went wild. After the game we headed back to the rugby club to celebrate the two wins that day and then headed into town. We sampled a few different pubs and then had a very dodgy and expensive Chinese. Peter C was in his usual form and complained when his spare ribs were full of bones!!! Somebody then had to pick the onions out of his main course as he doesn’t like em!!


We left early Sunday morning after Peter C had……no I cant repeat what he did but if he was a child of 3 rather than 37 it would have been more understandable! We 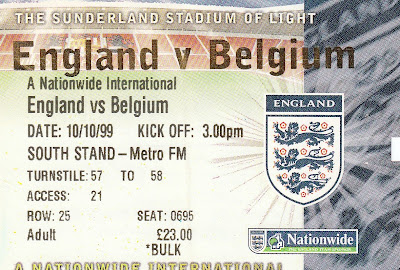 finally arrived in Sunderland after Liz had persuaded the nice man in a Police uniform to let us cross the path of the Great North Run. Every route into Sunderland was blocked and we were getting desperate. We headed into the nearest pub and bumped into the Rochdale lads we always see at England games and also some QPR fans who had come up for the weekend. The Stadium of Light is a brilliant stadium, it’s a shame the Sunderland fans didn’t get behind the whole team rather than just Kevin Phillips. Shearer got the expected stick but soon shut them up with a brilliant first goal. The Belgium’s played some great one touch football and soon equalised. Redknapp scored a stunning winner and kept everyone happy. After the match we bumped into the Exeter lads who had spent Saturday night in Shrewsbury (after their league game) . One of them had left at half time as he was sick of the Sunderland fans moaning at everyone but Phillips. It shows the importance of the national stadium being a neutral venue! We headed home on the A1 but due to the increased traffic and a crash when the road reduces from three lanes to two we crawled 50 miles in 4 hours in our Minibus with a dodgy clutch. After the detours on the way home I finally arrive back home at 3am. When my alarm went off at 6.45am I dint feel at my best. Roll on Hampden park on the 13th and once again the Albion match had been moved so once again we can see 2 games in 2 days.