Football is a funny old game, well that was an old expression I hear many times, at the moment I cant find much to laugh about on the pitch. Wednesday started with the 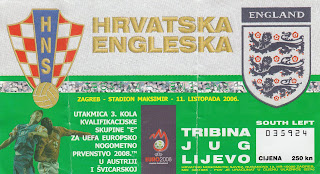 alarm clock going off at 3.50am, then the short drive to the Gatwick south long stay car park and I was checking in at 4.45am for the Flight Options day trip to Croatia. Jon Vallance and his lot were on the Thomas Cook "official" trip, plus quite a few other Albion fans (Thimble Keegan, the Jones family, Steve Ferris, Uncle Buck, Andy S etc) were at the airport, so nice to see some familiar faces. We took off about 7am in the pouring rain and with the 1 hour time difference landed in Zagreb at 10am. We jumped into the waiting coaches and just after 11.30am were dropped off in 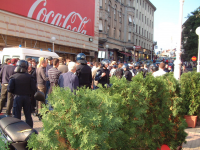 the middle of nowhere at a make shift coach park. We walked into the main square and then headed off to the road known locally as "the street of a thousand bars", well it would have been rude not to have gone and had a look. People had various times to be back at the coaches to go to the ground (ranging from 3pm to 4pm, way way too early for a 7pm KO), but we opted to DIY. The first bar we settled into saw us sitting soaking up the rays, drinking various different lagers. We started on Heineken (bad choice but the West 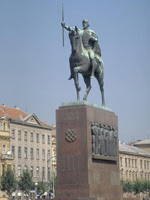 Ham lads just ordered on sitting down as they were thirsty!). Next it was a local beer called PAN, which was nice, we then moved on to a couple of other local ones, Ožujsko was interesting, the Karlovaèko was not so good, so it was back to the PAN. After having some excellent food (Pork seams to be the main dish in Croatia), we decided it was time to move on. We had been warned almost not to mix with the locals as volatile and unfriendly, so the next stop was a local bar, heaving with local fans. We were made to feel welcome, and the bar owner insisted on buying us all a beer. They played some song that got all the locals singing, we then had our turn to sing the National anthem, then they played the same song again and again. All the locals fans wore shirts and it made for a colourful scene.

At 5.30 we decided we really should head for the ground. We walked back to the main square, jumped on Tram number 1. The tram was about 80% England fans who had also ignored the rediculous stay clear of local bars and places and it was once again a great sing 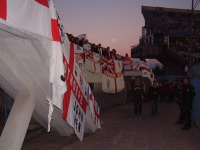 song all the way to the ground. We got talking to a group of Hadjuk Split fans, who said they hated being in Zagreb and were more of a target to the local Zagreb people then we were. The tram eventually got us to near the ground, the stop before ours saw riot police running down the road battons waving with tear gas, no idea what was going on, but we stayed on until the next stop which was opposite the England section. It took just a few minutes to pass the security checks, even less to pass on the chance of a 0.5% can of local lager, and we were soon in the ground. 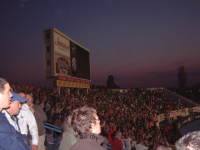 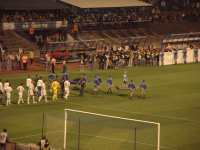 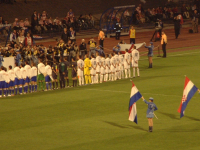 Our end was an uncovered section (as was the whole ground). Each stand was totally isolated from each other, all starting about 10 feet in the air, a bit like the South Stand at Withdean, must have been strange for the players. The local fans in the North end of the ground were already bouncing around and singing, the England end slowly filling up. Just before kick off all hell broke out by the entrance. An England fan without a ticket tried to get in, the stewards answer to his attempts to get in was to punch him in the mouth, wrestle him to the floot, call over his mates and put the boot in. Needless to say the England fans reacted and went in to stop this, to which the Police batton charged everyone. People came in with various bruises and cuts, we luckily missed all this and had taken up our seats right behind the goal. The chaotic scenes eventually meant those without tickets getting in, but lots with tickets held outside, batton charged again, before being let in about 15 minutes into the game. Croatia having th European Championships in 2012, your having a laugh! The match - more rubbish and lack of committmet and fight. Croatia deserved to win, and I felt for Robinson who after some great saves, saw us go down 2-0. The Croatian fans made plenty of noise, let of quite a few flares and didnt want to go home. They had a strange passion for waving irish Tricolours at us, hoping to wind us up I guess, to which England fans responded wiith chants of "Serbia" which didnt go down well. We were kept in the ground for about an hour, saw Garry Mills and his boy Jake (they go to the Albion games with Straws tours), eventually got let out, the England players emerged the same time as us and got told in no uncertain terms that the passion and fight was missing from there game. We got back to the airport about 11pm local time, and landed back at Gatwick about 1.45am. So Holland away next on the 15th November, time to try some new players if we want to got to the Euro finals in Austria/Switzerland. 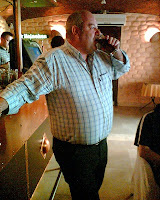 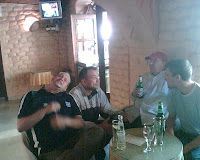 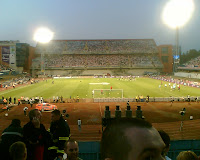 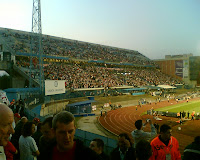