We flew out from Stansted (caught in usual tailbacks on M25 and Dartford tunnel so took 3 hours from Brighton) on Thursday afternoon. There were quite a few England fans about, most going to Graz, but a few on our flight to Prague. A nice polite Policeman phoned our passport details through to NCIS, and we soon on our way to the bar. We bumped into another fellow Brighton fan at the airport and had a couple of beers before catching our flight. Quite a few of our Brighton mates were staying in Prague, we had 5 hours before our onward flight to Bratislava with Czech Air so

caught a taxi into town and ended up in the Budvar bar. The last time we had drunk there it was before the 5-1 thrashing of Germany, so felt good! Soon we were heading back to the airport in time to catch out 42 seater plane to Bratislava!
We arrived about 10.30pm into Bratislava, found a handy cashpoint, got out 5,000 Slovakian Koruna (about £80) and caught a taxi to our Hotel to check in. It was a bit out of town, but not bad and at £30 for 4 nights accommodation, not complaining! The only complaint was the hotel bar closed at 10pm, so tired from a few beers in Prague and all the travelling headed to bed.

Phil makes a point that we are a rather long way from central Bratislava, Phil its just over the other side of that big building - I think!!!!!


Friday we got up reasonably early (still missed breakfast as only served until 9am!!!) and caught a trolley bus and then normal bus and 15 minutes later were in

Bratislava (Bus stop by the big Parliament building). We had a wonder round and soon found the old historic part of Bratislava, very similar to Prague but a lot smaller. We ventured
into a small shopping complex and found a nice quiet little bar for a couple of early beers just to get our bearings. After drink we of course needed some found so we went into a nice looking restaurant and the friendly waiter said he would make a

selection of his choice for 3 of us. It started with a green salad, followed by a mixed grill with rice, chips and potatoes. Add a few beers to that and it came to just about £4 each!!!! After that we ventured out again and eventually ended up in 17 Bar, not far from the players posh 'Carlton' Hotel. We had a few beers at about 35p each and then went and met our mates who flew in that afternoon. The Piano bar was next and it was full of England. We had a few more beers (mmm starting to sound like an alcoholic.......) and people soon moved on to other bars and we headed back to our hotel. It had been a cracking peaceful day (or so we thought)

A few pictures around Bratislava

And a few more!

Saturday and we actually made breakfast. Hurray!!! One of our mates was already sat down and said 2 England fans shot last night in the bar next to 17 bar.

Two managers must be better than one Sven? Liz and I take charge but cant decide which way to kick!!

I was stunned and a little worried. A few more rolled down to breakfast and they said that by the end of the evening bars refused to serve England fans. We expected the place to be closed down, but we headed back to 17 bar and it was open and serving as normal. We met some lads who got attacked the night before and had been with the two lads shot. Apparently the bouncers made a mobile call and they could not believe it when a gun was pulled. Two shots were fired, but one bullet did the damage. It passed through the leg of one, bounced off the floor and wall behind and ricocheted into another lads neck. Horrific. The lad shot in the leg turned up soon after being released from Hospital. The other lad would have to have surgery to remove the bullet! 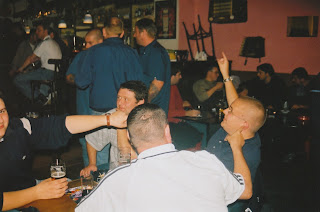 
People were a bit on edge but everything was calm and we decided to head to the ground around 6pm. We caught a taxi and it dropped us on the corner for the England fans. We strolled down to be met by Police in riot gear (fair enough), truncheons drawn (bit OTT, but understandable) but in full ski mask with MILITIA written on them. They were very aggressive pulling and pushing people for no reason. We passed through this check, they did not check tickets, just intimidated you and made sure you were English. Next was the really scary part. A few thousand England fans with one rusty, metal entrance. There was also a solid metal crash barrier (normally to stop people queuing in the road) that meant people climbing falling over it! It was a disgrace. I though people from UEFA and the FA inspected the facilities at the ground? After about 20 minutes a bigger gate was forced open by the weight of numbers and baton wielding police grudgingly let people use that as well.
Once inside we saw some empty seats (by the fence segregating fans) and headed for that. Luckily we saw some other mates and joined them in the middle of the section, towards the back. I imagine most people saw the game so wont go on about that too much. After about 35 minutes we were suddenly shocked to see the fence open up and ski masked thugs called Police charge in and batter every England fan in site. As a couple of others said after it subsided a few England mobbed up and tried to retaliate. Stupid and mindless, but if you saw your mate get cracked around the head for nothing, they saw that as all the vindication they needed. Once again another Police charged and a lot more violent this time.
A family we know from Brighton appeared and had been in the middle of it. The two kids were shaken but had avoided being hit. Many others were not so fortunate and loads of people walked along covered in blood, some bandaged, others just pouring blood. It was a disgrace. Luckily the second half was more peaceful and the highlight was the mock Mexican wave after we went 2-1 up! After the game we were held in but got back into the centre with no more incidents. Most bars were shut but we ended up eating China food as they called it and had a wonderful Chinese meal. We got in about 11.30 and left at 1.30 after great food and many beers. The place was heaving and the takings must have been a record! 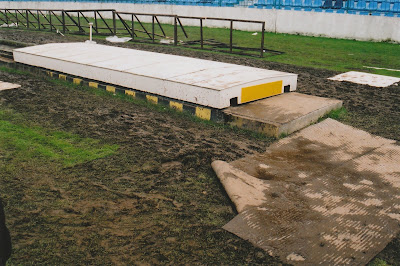 Three guesses what and where this is???? Its the players tunnel at the ground in Bratislava. Probably one of the worst grounds I have visited!

Sunday we had a day of leisure. We strolled along the Danube then decided to hop on a tram to go to the Castle but went the wrong way, and ended up back at the ground! We decided to see if it was open and it was so went inside and had a walk on the 'pitch'. It was unreal, we took some great photos

in the dugout, recreating Owens goal (see end of this blog), pictures of the general state of the pitch, the inches of mud Seaman was wallowing in, and then the cracked concrete stands, the away terrace still covered in blood, the entrance gates, basically everything to show that the stadium was not 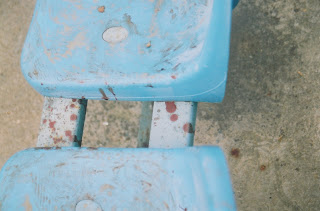 fit for a football match. After that we went back into the centre for the rest of the day for some more sightseeing. Bratislava really is an interesting place and one I would like to go back to.


Anyway time for some more pictures of the place!!!

Even more pictures of Bratislava - I loved the place

So just a few more - Woo hoo Phil spots the Danube, we have been looking for that since our trip to Hungary!!

Monday we had a 5.45 flight to Prague a 7.25 flight to Stansted and I was back home just after midday. Bratislava is a nice place, people in general a bit miserable (perhaps that was down to the persistent rain and cold wind, or the fact they are still repressed and persecuted by the local Mafia?). We actually had a good trip and after seeing 10 defeats in a row for Brighton nice to see your team win again!
On the way back I heard Mark (Perryman) on Talk Sport. Its time we stood up for our rights as England fans again. Slovakia does not have the stadium or experience to hold big matches. We comply to strict standards and UEFA pass the grounds fit for matches, how the hell did this one pass an inspection?
Mark R

Now for our Phoenix of flames moment, we reinact the England goal 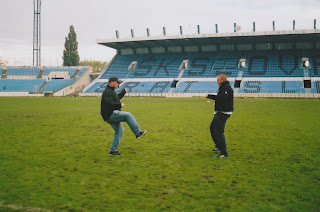 I lay off the perfect pass to Mr Blackman 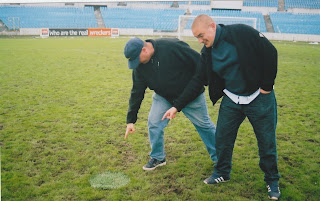 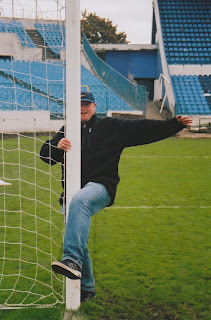 I get to the ball at the far post 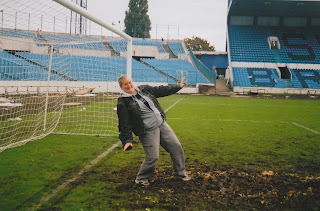 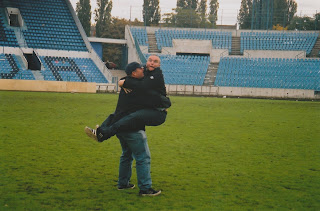