Booked up ferry - wander round Aomori -

Sushi by mistake night (free green tea, I ask for Chicken - no fish only - comes back with Chicken egg I had rice and egg, we both had rice and onion, Liz had rice and shrimp OK, rice and something not so nice. Liz had now turned the colour of the tea, she had drunk so much of it to take away the taste. £25 for our 20 minute raw experience of Japanese food! We head back to the safety of our new home, the Karioki bar from the night before. The big chap in the Grey suit soons takes the microphone up. He is built like a Sumo wrestler but has the voice of an angel. He does several songs and gets a standing ovation. They say Karaoke was invented in Japan, well it is still alive and kicking today and very popular.

Hirosaki for the day - gardens, old samurai houses. Phil B arrived. Meal Pork and noodles in a broth - again! Has to ask to see what somebody else was eating and said we wanted that! 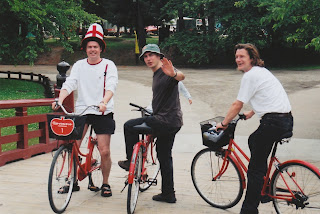 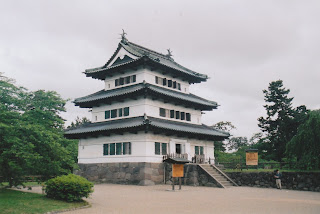 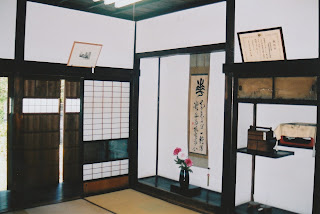 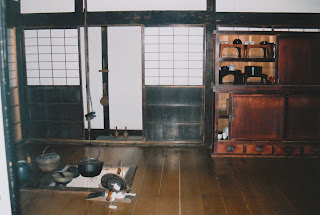 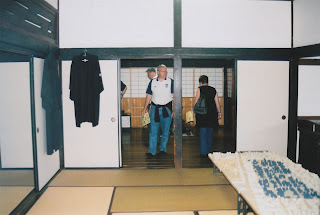 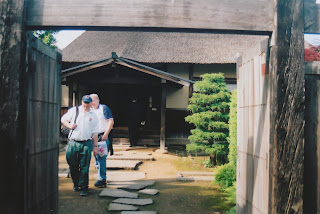 We visited an old Samurai house. The floor boards are designed so that they squeak like a bord when you walk on them, hence they are called Nightingale floorboards. This was designed to warn anyone inside the house that they had visitors, more than likely not coming in peace!!!

It was time to move on. The journey started with catching the ferry from Aomori to Hakkodate. The sea was as calm as you like. We had opted for the ferry rather than the train, but as you can just make out it was rather foggy. The train spends most the journy in tunnels, we spent several hours seeing nothing, but we docked exactly on time as ever in japan, infact we waited outside the harbour for several minutes to make sure we were not early!

To pass the time Sal dug out the travel monopoly. Soon we had a big audiance as the Japanese tried to work out what these strange people were playing. it certainly helped to pass the time1 Hurray - a view!!! We soon left the fog behind and another glourious day beckoned.........and another from our speeding train. We had now moved to the North Island and the prospect of playing Argentina in the indoor stadium at Sapporo. We had left Phil B just one thing to book up on this trip and that was the accommodation in Sapporo. what would we find when we arrived....................

Nice room, love the beds, what do you mean what beds, look on the floor thats your bed!!

Accommodation no beds, Meal (yes you guessed Noodles in Soup) Colin managed an Ice Cream. Liz had a nice variation with Sweetcorn and butter added! 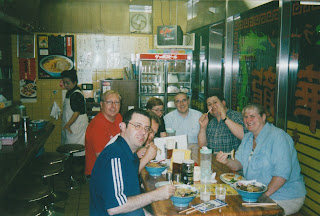 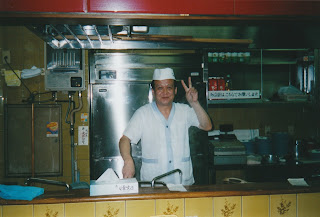 England v Argentina 1-0 in Sapporo
Out until 4.30 in English bar. Jugs of Sapporo until it runs out then jugs of Kirin 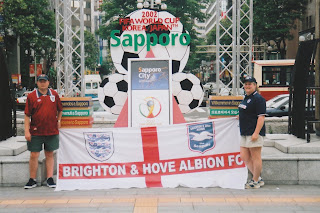 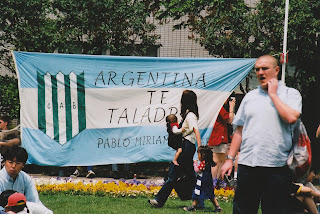 Liz and I fly the flag with the welcome to Sapporo world cup sign...but does Phil know there is an Argentinean flag as his background?? 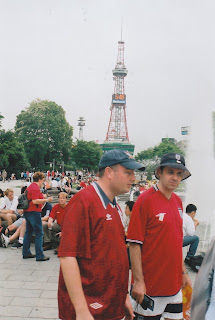 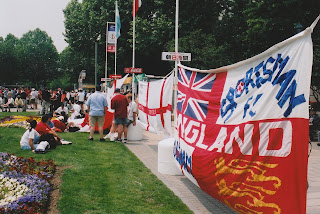 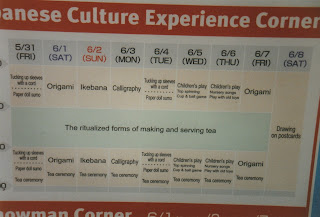 We decide to move towards the ground, Little Sal's getting excited! 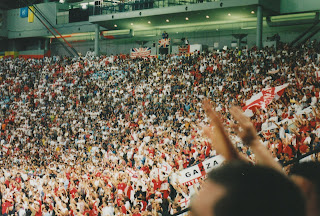 I dont think I have ever wanted to win a game so much, the atmosphere really is electric, the roof creating a fabuous cauldron!

A few pictures from the game

Flight Sapporo to Kansai (Osaka) Train to Kyoto
Up at 6am to get to the airport
Hotel about 2 mins from station, we get lost and it takes us ½ an hour to find it!

This was one of the best temples we visited - it was massive in size and fantastic in decoration!

Find road with about 6 temples in it!
Asian restaurant – strange but atmospheric place for a meal. Place grew on me as time went on!