Austria v England, 4 September 2004 World Cup 2006 Qualifier,
It all started on Friday the 3rd September. Liz and I flew out to Salzburg from Stansted and by about 11pm had checked into our hotel.

Saturday morning we spent sightseeing in Salzburg, we visited the Mirabell Palace and the place was swarming with bridal couples having their wedding photos taken. Liz and I spent our time dancing round the fountain that featured in the sound of music (the bit where they sing Doe a deer etc etc, yes you do know it Dr Curtis!). After that it was off to the tourist information office and time for a nice refreshing cold beer on Glockenspiel square(looking out over the statue of Mozart). At 1.35 we caught the 
We soon bumped into our Gainsborough and Northampton mates and had a couple of beers in Stephansplatz Square. We moved on out towards Prater area , walked passed the fare ground and about 40 minutes later arrived at the stadium. We bumped into another mate Billy who was trying to get a ticket, there were not many going about which was unusual.

Anyway we decided to head into the ground. 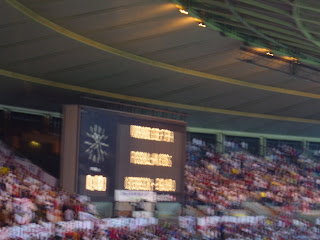 We were in the back 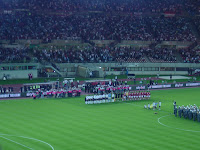 section behind the goal that Gerard scored on. Now at 2-0 up and with the last train back to Salzburg at 11.25 on the other side of Vienna Liz and I had to sadly opt to leave early (glad we did as the England fans kept in for 30 minutes and then made to walk back to the coaches even if you were not on the official trips!).

As we walked down the steps from the Upper Tier it becomes 1-2, as we approached section D to pick up a tram it became 2-2!
Sadly none of the trams were leaving until the final whistle, but we flagged a cab and by luck the driver had a TV set up, so we saw the last 8 minutes driving to Vienna West Station. We arrived about 10.55 so if we had delayed then we would have missed it and faced a wait til 6am for the next train. Most England fans on the train had watched the games in the local bars as not many tickets going about, but I would guess at about 5,000 at the match (official allocation 2,200!). We arrived back into Salzburg at 2.58am and retired for the night.


On the Sunday we visited Hohensalzburg Fortress up on the hillside with stunning views of Salzburg. Then it was on to Getreidegasse area of Salzburg to visit Mozart's place of birth, next it was on to Hellbrunn - Palace and Trick Fountains. It's a great place to visit and the bloke that lived in it was a mad man. The food table had water spouts under seats and as he was a prince people couldn't stand until he did, so when he got board he got his servant to turn the taps on and they had to sit and suffer!!! The places was full of such bizarre things, including an amazing moving village scene all powered by water. An English couple we got talking to, have parents who lived in Lewes so they looked out for Brighton results).
Once we got back into the city we ventured out for our evening meal.We found a great restaurant (bit like a big beer Keller) and tucked into deer, apple strudel and the local beer.Monday and it was a hike up to a very old monastery next to the Salzach river. Once we reached the top (in sweltering heat) we had views over the whole of the Salzburg region. We bumped into a couple who had been to the play off final in Cardiff (spotted the badge on my Brighton shorts) as her brother was an avid Albion fan!. Now it was time to head off to Poland on the overnight train from Vienna 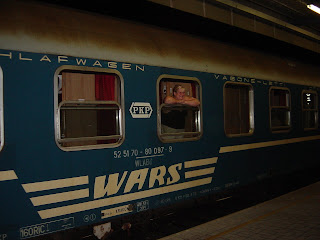 This report continues in the Poland report above this one.............but before that some more pictures from Salzburg 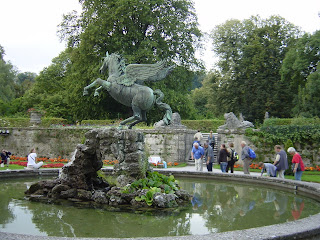 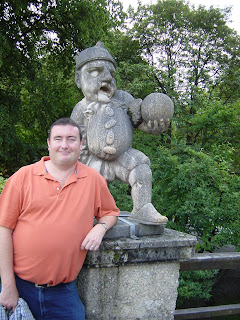 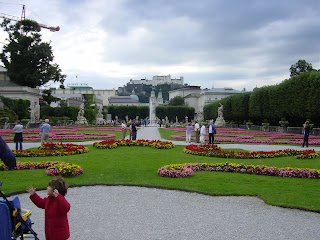 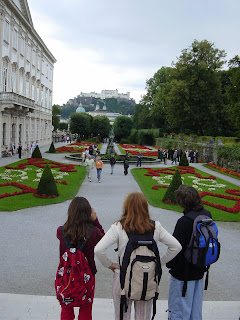