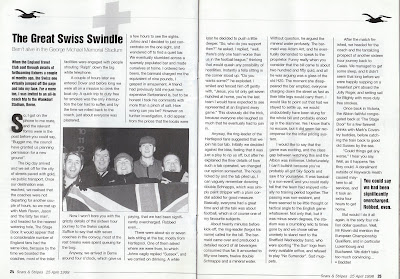 I have just got back from Switzerland after watching 90 minutes of direfootball , well apart from Mersons goal.

One of the highlights of the trip for me was a large Doncaster flag with Richardson Out flag on the far side of the ground (in the expensive seats £28 for a friendly!!)

Went on the official England Members trip because it was the cheapest way (for once) and nearly every person we spoke to supported either lower league teams or non league teams. There were seven coaches decked out in Union Jacks/St Georges flags supporting teams such as York City , Rochdale ,Bromsgrove , Man City (well they could be a lower league team soon!) and Brighton. Perhaps the FA should realise that life out of the premiership is alive and will never die.

was a dump and not fit for International Football.(The ground is aptly called the "Wankdorf stadium") The seats were wooden benches built on top of terracing. The stair ways out of the ground had no lighting and large fences at the front had no emergency exits but a large moat in front it!

The only saving grace was that you could purchase alcohol in the ground and take it back to your seat. Alcohol was also freely available outside the ground.(even if it did become rather cold to drink as it was bloody freezing)Makes a change for England fans to be treated with respect. I didnt see any trouble before or after the game , lets hope this continues. If Enland take 1,500 0dd for a friendly how many will travel to France this summer?

Cant wait for Cardiff away Saturday. Always look forward to this one!