When England announced a friendly in Hungary I thought yes, the chance of a trip to Budapest, a capital I had always wanted to visit. Due to Albion games either Saturday, we

needed a midweek flight, but the cheapest flight to Budapest was about £350, no way. Eventually the best offer we could get was a £190 flight to Vienna and then a short 3 hour train trip to Budapest. Everyone appeared happy so we booked up.

We had a 4am check in time at Heathrow so ventured up to Haywards Heath on Monday evening to the Burrels, a curry next door, and then a 7 seater taxi to Heathrow airport. Peter ‘Fatty’ Taxman made the first classic comment before we had even left Sussex. Not being particularly keen on curry he broke into a panic after 7 Kingfishers were ordered, saying I’m not bloody eating one of those! He relaxed when he discovered that we had in fact ordered lager!

On arrival in Vienna we headed straight for the station to catch the train to Budapest (just £28 return). We sampled a few Austrian beers before leaving and then settled down for the three hour journey. We arrive in Budapest in the middles of a cloudbust, complete with thunder and lightning.

We were fortunate enough to have met a tourist information officer on the train, who recommended what proved to be an excellent hotel. We had four to a room but at £20 for two nights you can’t complain.

We went out an about and sampled the local beers and hospitality. There was a distinct lack of England fans about, but we eventually stumbled across some Doncaster and Middlesbrough lads we have known for a few years from England games. We teamed up with them and wandered around the capital having a good laugh. Match day was spent as usual in various bars, with a few more England fans turnig up. Pete ‘Fatty’ Taxman settled down with his 2 litre glass of beer!

When we got into the ground the England section was empty but the atmosphere from the Hungarian fans was one of the best I have been in. Their patriotism was superb and love of football clear. I would estimate that only around 500/700 England ans made the trip. 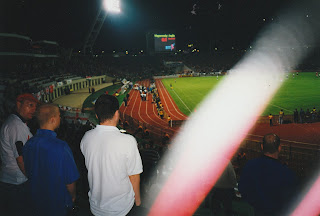 Cup. The players did a lap of honour and lined up holding their hands and bowing to the crowd. In response the fans did the same to the players. It was football fever at it’s best. As for the England players Shearer came down and a couple of others waved, but the rest buggered off.

On Thursday morning we headed back to Vienna. We had an evening at the fun fair, which included the Big Wheel (the biggest in the world I believe). We had a great evening apart from Nick ‘Bartman’ Bartholomew who after several mad upside down, mental rides decided it was time to empty his stomach contents, but at least it made room for more beer anyway!

The accommodation in Vienna was basic, and we shared our room with several fleas judging by the bites in the morning.

A short trip, but as Bulgaira was only a few weeks away, probably a good thing! Photos of our day in Vienna, we even did some sightseeing (probably between bars!)