An interesting day out. Ventured up to London on the 1.20 Connex express and we were in Victoria just after 2pm. Couldn't get served in the Shakespeare's outside the 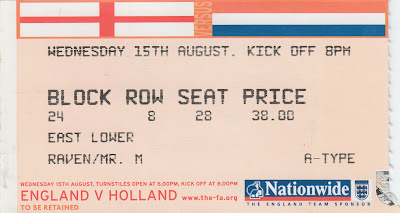 station as had a football shirt on (England shirt but they still wouldn't serve us and they informed us you wont get a drink in any pub today with that on!) Went next door to the Stage Door and got served no problems! We had a chat with a West Ham fan but decided it was time to move in the direction of the ground so moved onto Highbury & Islington and a pub called The Famous Cock Inn. Not a bad pub and we soon got talking to a few Notts Forest supporters. Everyone you meet knows about Brightons problems and the struggle for a new ground. They were all getting disillusioned with football and mega buck players and some of them had actually 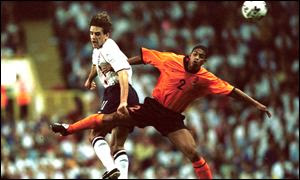 stopped going to Forest last season due to Irvine Scholer being on the Forest board!Around 5pm we headed towards the ground, found most closed but ended up in the Red Lion about 5 minute walk away! We met up with Coventry fan Sara, Phil 'Yuppy' Blackman, a few more Brighton fans, Scunthorpe fans Darren and Mark and Careful Colin the Birmingham fan. The pub was fairly quiet but once more than 3 people queued for a drink it all went to pot. They only had 2 bar staff on as they hadn't expected it to get busy! We got talking to a few Stoke & Wolves fans, the Stoke fans looking forward to a trip toBrighton again as they always had a good laugh in Brighton.

We headed for the ground at 7.45, just got in and heard the kick off delayed by 15 minutes. We paid £40 for our tickets (once paid ticketmaster booking fees, handling charge, postage charge , rip of tax etc etc) and our seats were down by the corner flag next to the Paxton lane end. What a rip off! As for the match, we were out classed and 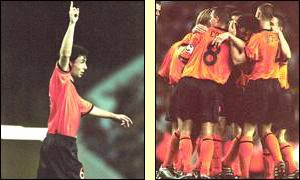 Van Bommel and Van Nistlrooy were IMHO the two best players on the pitch. The team wasexperimental and got lost 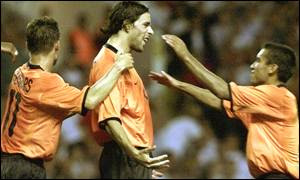 with all the substitutions. I'm sure Sven knows his team for Munich already. At half time bumped into Kev and Ash and watched the first five minutes on the second half on TV screens under the stand! We managed to miss the whole of the David James episode. We did a Mike Curtis and left 10 minutes before the end to beat the crowds.

We aimed for White Hart Lane station but it was complete chaos. The Policewere clue-less and we waited around 35 minutes to get on a train. The whole event had been badly handled, I cant believe the problems they have as the crowd was 3,000 below capacity, only around 1,000 away fans and yet they acted as if they have never handled big events before! Phil B was still on Tottenham High Road waiting to catch a bus home and that was in chaos too, couldn't really hear what Phil was saying but could hear plenty of shouting going on in the background (you still alive Phil?).We got back to Victoria in time to catch the 23.32 back to Brighton. I hopethis is just a blip, I guess we wil find out on the 1st September.