>Was a 0-0 draw at Wembley part of the deal to release the 2 nurses, or were England >just not good enough?

Well first of all at least Saudi Arabia have qualified for the World Cup finals. The 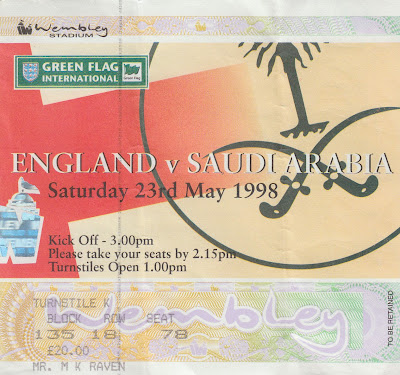 match was pretty dire and Sherringham gave his usual display, ie stand around giving bugger all effort. Why not play Owen , Dublin or even Cole. As for Anderton , it showed that he was not match fit let alone fit to play for England. Hoddle has very blinkered vision about certain players. I would rate Le Tissier , Wise , Merson , Parlour all above Anderton but Hoddle said that Anderton is a naturally fit player!!! 17 games in 3 years doesnt back that one up. I remember England had poor results in the run up to Italy in 1990 so perhaps theres nothing to worry about.

The attendance of 63,000 isnt bad for a friendly , it shows how popular football has become these days. I see one of the Neville brothers was moaning at "15,000 singing stand up if you hate Man Utd" he got that wrong it was at least 30,000!!! Dont these players know that Man Utd are (other than teams local rivals) the most hated team in Britain.

Lets see how they get on in Morroco this week and then roll on June 15th.