Well it has been a busy time. Huddersfield away last Tuesday, Swindon at home on Saturday, Forest away on Monday then to France last night, so not had time to do any 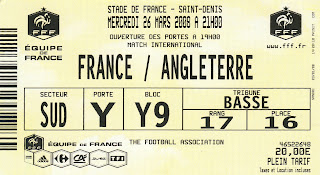 reports! Swindon on Saturday saw Racon make a very good debut on loan from Charlton. I thought we deserved the win and the wind (which changed direction at half time) didn't help. 2 great goals by Forster. Forest away- a good defensive display. We looked very tired in the 2nd half. Racon, Elphick, Lynch and Kuipers were all outstanding and we deserved a point.

Tuesday and it was off to Paris (some mates went by ferry from Newhaven and Martot was returning home for a couple of days - players been given 2 days off to rest). I landed in Paris around 3pm and by 6pm had checked in to our hotel. At the station I bumped into a Brighton lad (Adam) who had moved to Luxembourg many years ago. We reminisced about the good old days of standing in the North Stand and various away games. I met up with the lads on the ferry and then went on a pub crawl. Paris is expensive (especially with the poor exchange rate from the £ to the Euro). We paid 8 euros in one bar (about £7 for a pint), but most around the Garde De Nord were about 5 euros (still about £4 a pint). The one we made our local was a bit of a dive. We mentioned food and out came the pots and pans. One 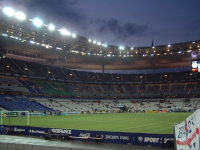 of the women behind the bar cooked us some steak and chips, which she served up then left. Luckily we were sat next to the kitchen as she had left the oil on the heat. Chris dived in and 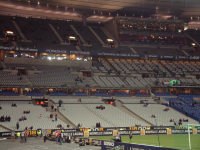 switched it all off as the oil was smoking!!!! We found another bar on the way back to the hotel so it was a late night not helped by the required kebab at 3am!

Wednesday and it was a late start, we didn't manage to get to the bar until midday, but with a 9pm kick off plenty of time. Met up with quite a few other Brighton lads and some of the usual other lads we know from England games. We managed to fit in a 3 course meal at a bargain 9.5 euros, food was a lot cheaper than drink! We headed to the ground at 7pm, stopped at a bar very close to the stadium and managed to get 4 free beers as the barman was totally confused as to who ordered what, we waited to pay and he was off doing something else! 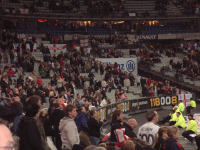 England fans start to turn up, I was in the end section next to the French (and Tunisians and Moroccans!!) 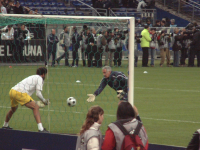 
We got in the ground about 8.30pm, the usual dreadful organisation saw segregation 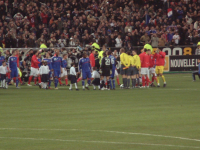 fall apart and long delays for police searches. It was all fairly peaceful until about 2mins before kick off. The section I was in suddenly saw about 20 french lads somehow push open the gates into the back of our section, run down the steps looking very brave and gesturing to everyone, to suddenly find about 50 England lads set about them and give them a good hiding before driving them back out the England fans section as they turned tail and ran away! It summed up the poor 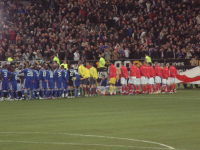 organisation and lack of interested from the French organisers! I expect Englandfans will get the blame again when everyone was looking after everyone else. Very poor match 4-5-1 doesn't work 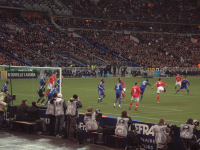 with Rooney. A nice standing ovation for Beckham when he was subbed.
After the game it was back into Paris, and back to our "local" for a few more beers. We wandered back towards the hotel and back into a bar run by some Sri Lankans. It had officially closed but as we had been in the night before they opened up again for us until the early hours.

I got to bed at 2am and got up at 4.30am to get into work this morning! Just Leeds to go in this very mad (and expensive) March - I think that will be 9 Albion games and 1 England

Hi,
Football is a team sport played between two teams of eleven players, and it is a very popular game.