Liechtenstein v England, 29 March 2003, Euro 2004 Qualifier
We set out to Zurich on Thursday evening, flying from Heathrow to Zurich on Swiss International. Surprisingly there appeared to be no spotters or Police at the airport and we passed through the check in, passport control and boarding with no checks (very unusual for England away games!). Our plane was virtually empty, I counted 37 people in the departure lounge for a 737!!!We landed just after 10.30pm local time, just missed the 10.43 train into central Zurich but caught the 11.02 train. 15 minutes later we were at the central station, so set about finding our hotel! After a detour or two - well how was I to know that we were following a smaller river and heading in the wrong direction!) we finally arrived about 11.45 so checked into the 'Zic Zac Rock' Hotel. Each room was named after musicians / bands, Liz and I were in the Elvis Presley room, Piers was Frank Zappa! Piers went out and met Phil Blackman who was staying just down the road.Friday morning and we were up reasonably early. We strolled down to look at the lakes, and wondered around old Zurich.

One of the main sites is a clock face nearly 9 meters wide, then again there were clocks all over the place.

It is an interesting city and we went up to the University for views over the city. It was soon around midday so food and drink time. Everyone was surprised when we all got a beetroot dish as a starter, have to say beer and beetroot is a strange combination! The food was nice, but expensive and we were paying around ? 4.50 for a pint of Herlimans (nice strong beer!). We did more wondering about, decided to give the 'toaster' museum a miss (Phil thinking of going today if he runs out of anything else to do!!). We went back to the hotel to drop off our bags and then headed out for the evening. More England fans were arriving by the minute and sadly it was the hooligan element. We met our mates from Rochdale and bumped into the usual faces from Middlesborough.
We were in one bar, but moved out as the nutters moved in, the bar we moved onto was brilliant and we sat down for a relaxing evening. Phil bumped into three scousers who treated him like a long lost brother, when they went Phil confessed he couldn't remember ever having met them before! Sadly around 11.30 the first signs of trouble appeared, the bar doors were locked as beer glasses were being thrown down the road. It was over pretty quickly and nobody had any idea what had happened. Liz and I wandered out the bar to go and get some food.
We returned about an hour later to find we couldn't get down the road to the bar 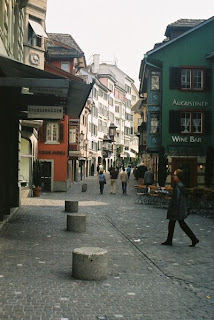 we had been in and people walking away from that bit of town wiping tear gas out there eyes!We headed in the opposite direction, found quieter back street bars and carried on until heading back to the hotel around 2am.Saturday, we planned to get the 9.10 train from Zurich to Sargaans that connected with a bus to Vaduz. We arranged to meet Phil who had a ticket in the England section, Liz and I had tickets in the Liechtenstein end that we picked up in London a couple of weeks ago for £130 each. They looked genuine after comparing them to tickets others had. We walked down the road to the train station and it looked like a war zone. Broken glass, a few broken shop windows, all very strange as nobody about at all. We bought our tickets to Vaduz for 60 Swiss Francs, and boarded the train. It was one of the most spectacular train journeys I have ever been on, first passing the lakes outside Zurich, then through other lakes and stunning views of the Alps. Despite my hangover it was breathtaking.
We arrived at Sargaans and boarded the bus to Vaduz. The bus was stopped on the border and they did the first hooligan passport check. Everyone was fine (only about 40 of us on the bus, hence the reason we left early!).
The bus was given the all clear after about 20 minutes and we were soon in Vaduz. Vaduz is beautiful, and we headed for a cafe for some food with stunning views of the Alps in one direction and Vaduz castle on the mountain side above our heads.

We ventured to the tourist information office to pay our 2 Swiss Francs to get a Liechtenstein stamp in our passport (yes I know that very sad, but in did mean a stamp on my last empty double page in my passport!)We wandered around

taking a few photographs, then wandered back to the main square for a few beers. Liechtenstein is small, just 16 miles by 4 miles, the population is 33,000, the tourist attraction is a stamp museum, and everything is very expensive. The good news was that the majority of ticketless fans had remained in Zurich and the atmosphere in Vaduz was relaxed and friendly. We met up with our Northampton (had fake tickets and didn't get in), Coventry and Gainsborough mates and sat in the bars with the picturesque view and very very hot sun!. 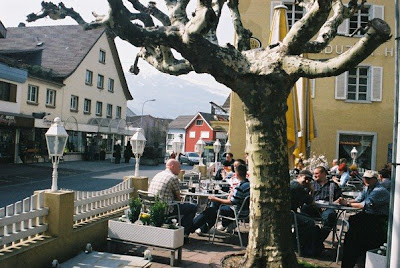 Our tickets were genuine and I reckon that out of the 3,548 crowd, 948 were in the away stand leaving 2,600 in the bigger stand we were in, of which about 1/3+ were England fans. The range of prices people had paid was staggering. The 5 Charlton lads we know had paid out £1,250 between them, the West Brom lad £300, which was about the average! 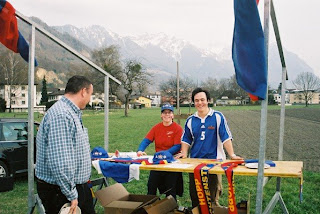 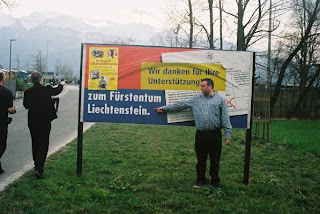 
The Cov lads had paid £350 but had hospitality tickets, which included free food and drink from 4pm. They were the group behind the goal absolutely hammered! 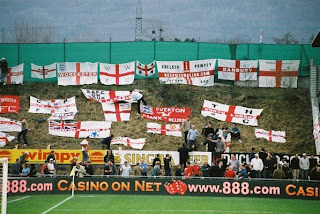 The ground was like a mini Withdean, but with a proper roof and 2 empty small terraces behind each goal. The views were dominated by the Alps. It was good that the Police had nothing to do in the ground as the fans behaved, there were 9 arrest in Vaduz as the one bar showing the game in the centre, decided that the England fans had drunk enough. Very sad there should be any trouble after treating us with respect.The game - mmmm - bit like a practice match.

The Liechtenstein fans got very excited when they won tackles, or passed the ball about, but I have to say it was all very muted. Once we had scored the game was pretty much over and at 2-0 England slowed down a game that was already very slow and boring! The highlight was when they hit the post, the crowd nearly erupted.At the final whistle they had buses waiting to take us back to Sargaans, we were on the 8.40 back to Zurich and back to Zurich Central at 9.50. Sadly the nutters were all about (looking for the local Turkish community who had allegedly stabbed 2 England fans the night before. Nobody seamed really sure how 3 people got shot, 2 stabbed and who did it, but as usual the Swiss Police managed to arrest 26 England fans over 2 nights, but had been unable to trace the knifeman or gun man). It was all looking ugly so we went back to the quiet side of town and head a cracking Chinese meal and wandered back to the Hotel about midnight, £120 lighter after the meal!!!!!!

Sunday morning we ventured to a local beer hall, Piers had a 350g sausage and I tucked into the local pork and veal alongside the local specialities of rosti potatoes (hash browns!) and large beers! We flew home at 3.30 and were back in Durrington by 7pm.England must perform better on Wednesday as the Turks are a different proposition to Liechtenstein. I just hope everything passes peacefully, but as the FA in their wisdom has given 5,000 tickets to the Turks I fear not.

A few more pictures at the match. 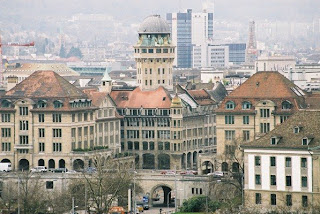 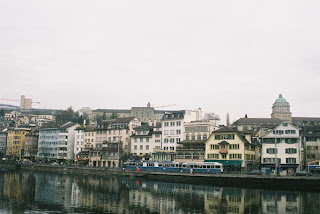 Well you just have to have a picture of cuckoo clocks in Switzerland! 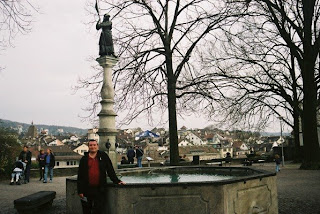 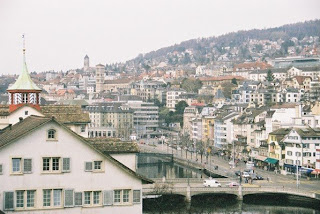