On Saturday I was at a mates wedding in Salisbury. The wedding was a 1pm kick off, f ollowed be free beer/wine until about 7pm and then it was a pay bar. I was there until 9pm, before heading up to Heathrow. I arrived just after midnight, why did I have so much beer? I had to keep walking round terminal 1, I know if I had fallen asleep I would have missed the flight. Luckily the Costa coffee shop is open 24 hours, so a large coffee helped keep me going. Dave a Villa lad I know from other trips turned up about 4am, and gradually more and more arrived for the 4.30am check in. We had our boarding cards by 5am and then had to wait for the passport control to open. Flight options had managed to put on 5 planes for this game, good going at short notice (2 from Heathrow, I from Stanstead and 2 from Manchester). The passport control finally opened, all of us going to Germany were subject to a hooligan check by one Policeman on his computer. his neanderthal mate was loving the power said that he had the say when the plane could leave (due to take off at 6.30am) and that the checks would take as long as it took. The machine was playing up and it was taking about 4 minutes to send/receive info on people. The man doing the actual checks decided enough was enough and resorted to random checks, so we were able to board our plane as scheduled! We landed in Stuttgart at 9.30am, had a chat to the English Police Spotters as we queued up at the German passport control. They said the trouble had all been handbags and the local Police had a policy of prevention by detention, so wrong place at the wrong time and you call be locked up for 48hours as per German law. They had been delighted with the fans behaviour so far, and they were off to watch the Italy v Australia Last 16 match, the first game they had been allowed to go to! We caught the train to the ticket exchange place, we queued up for about 45 minutes and boy was it hot. Precious tickets now in our possession and it was time to find a bar! We found one in a back street and at 2.40 Euros for a large beer (and air conditioning) it was a paradise. Soon our mates from Middlesborough, Doncaster and Leeds all stumbled across the same place. So it was time for a few cold beers, a mixed grill to keep me going for the delay and ermmmm a few more cold beers. It was now about 3.30pm so time to wander to the ground. It was about a 25 minute walk and the heat was extreme. We passed one of those temperate/time displays and it was reading 34C.By the time we queued up to get in it was about 4.15. Bumped into fellow Brighton fan Andy 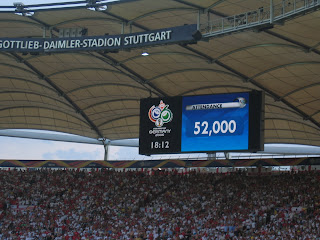 Stonstreet who was sitting in the row behind and Andy Shall who was sitting about 10 seats along from me. Great ground, but the heat drained a lot of the atmosphere away. I wont go into the game as i expect people saw it on TV, but the goal was weird. Beckham hit the free kick, it sailed over the wall, it was down the other end so nobody was sure what was happening, then Beckham put his arms in the air and wheeled away to celebrate, everyone was standing bemused for a few seconds followed by wild celebrations. At the final whistle it was party time, the players came round and applauded and they looked exhausted. So it was time to wander back to the subway and catch a train back to the airport for our 9.30pm flight back home. Bumped into West Ham Tony and Hornchuch Kev at the airport and we celebrated the win. Looking out the window and it was one hell of a storm going on. They closed the airport for about 45 minutes as was raining too hard for the ground crew to work in, but we finally got on our plane about 9.30 to face a delay of about another hour as we had to allow planes to land as they had been held away from Stuttgart to avoid the thunderstorms, the sheet and fork lightening was spectacular! Finally got back to heathrow about 11.45 English time, to find the underground shut, but luckily a coach got me back to Gatwick (£18 ouch). Luckily Liz was at Take That at Milton Keynes and I waited at Gatwick for about 45 minutes and Liz made a slight detour on the way home and picked me up! Anyway, Liz and I are back out to Germany (via Brussels) on Friday morning. Managed to book a hotel in Essen (very close to Gelsenkirchen) on the Saturday night (153 Euros - ouch again!), and back home Sunday, so next installment should be Monday 3rd July! All we need now, apart from a win of course is a ticket for Liz - anyone got a spare???? (Liz only had tickets for the Last 16 and 1/4 finals if we played in the larger venues which need us to lose the group! We are Ok from semi final onwards as both have vouchers for those - lets hope we need to use them!!) 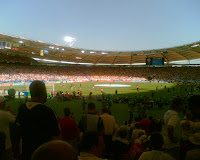 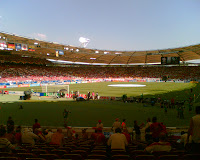