These pictures really sum up Japan for me. The old traditional Japan, was saw so many amazing things, but just seeing where people lived and worked was the best bits for me. unlike Liz’s rather sad broken and bettered umbrella the attendants gave her!

Kyoto is fast becoming my favourite place for site seeing in Japan. 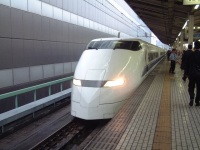 We catch the train down to Osaka from Kyoto. This was only a semi fast bullet train journey, but still very impressive. 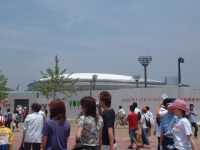 Yet another impressive ground for the final group match. The weather was hot hot hot. People delay getting into the ground to stay in the shade. The end we were in was getting the full impact of the sun. It meant quite a subdued atmosphere and the game never really got going 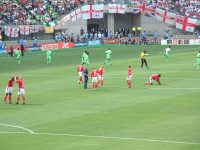 Bar in Osaka before and after game! Slow service. Family painting St George’s crosses on faces. Long delay afterwards to tube. People queuing with bicycles! Why! Actually just trying to get to the road but caught in crowd!

Flight from Oasaka to Tokyo
Should I stay or should I go? Meal to Ma ?? ??

We went in a really nice restaurant, they bought food in the order you order it, so best make sure you get it right! The last but one dish we ordered was extra thick noodles. It came with a seaweed or cabbage topping on a hot plate. As the heat took effect it all started to wriggle around! As with many dishes in Japan you are not always 100% sure what you are eating! I had a mouthful before I noticed the food wriggling about and nearly fell off my chair. Liz turned green, but in investigation it was just the seaweed stuff reacting to the heat, we think! Not a nice experience as I had visions of it being that octopus that wriggles in your mouth and stomach after eating it!

10.05 Tokyo 14.50 Frankfurt 16.15 Frankfurt 16.55 Heathrow
Met lads from Shoreham on flight got a taxi back to Hove with them!
Andy and Phil heading home the next day so will be in the air for the Denmark match. Phil is on Aeroflot and had planned to watch it in Moscow, but following the riots and death decided to carry straight on back to London!

I get back and remember to ask my Mum how her knee op went (luck my Sister phoned me on the way home to remind me so I could buy a card!)
Posted by Mark R at 08:15