Another great trip following England abroad. Only a short visit this time, I went with Stuart Adams who runs the A21 supporters club. Stayed over at Stuarts on the Tuesday night as it would be a nice early start on the Wednesday morning. Our flight left Luton at 7.30am (we bumped into Kev Jones and family plus little Kev at the airport as well as a few other Albion fans (Andy S ex listee plus a couple of others) and a few other people from Brighton who support other teams Ian - West Ham, Tim - Everton!) We landed in Skopje about 11.30 local time (they are1 hour ahead), the awaiting coaches took us to a bus park near the ground which was only a 15 minute walk from the ground. There were I think in total 16 coaches for Flight Options who ran 2 flights from Luton, 1 from Birmingham and 1 from Doncaster, and there were official trips from Gatwick, Manchester and Birmingham, so another 12 coaches for them, so it was a busy Skopje airport and coach park. We bumped into loads of people we knew at the airport (including 2 cracking lads from West Ham way - Kev and Tony that we had spent a couple of weeks with in Japan - they said hi to Mr Blackman). significantly since my last visit 3 years ago, there were lots more posh hotels, shopping centres and loads of bars and cafes. We settled down in a bar on the riverside and sort of got stuck in the chairs 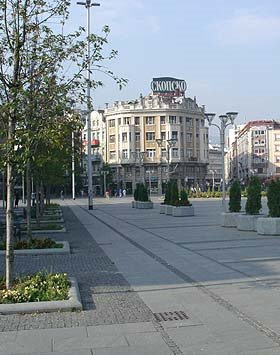 so didnt see that many different places. The locals were friendly and the local beer very nice indeed and at 80p a pint a bargain. The locally brewed beer was great stuff, 6% and called CHYVLLOT, well thats what it looked like, we just made sure we asked for the local draught beer As the day wore on more and more locals turned up and there was the occasional sing song from the Macedonians but this was actively discourage by the local police. The weather was hot and sunny, it was about 28 degrees during the day and it was still in the mid 20s when the sun had gone down. There were handful of beggars about, but nothing like the number from last time, plus loads of locals trying to sell perfume at £10 a bottle or lucky stones! We got talking to one of the kids begging, he spoke pretty good english and he perfected such a good cockney accent that West Ham Tony and Romford Kev gave his a few Euros after he had gone round telling everyone "up the Hammers". Just before we left the bar he came back to shake our hands and said thank you about a hundred times with a very big grin on his face, he seamed genuine enough. He lived with his bad in the hills behind Skopje, I think they were probably travellers but his english wasnt that good and by then our lot were up to the Fatty Taxman in standards of talking rubbish due to alcohol (BTW Pete - Bernie from Tottenham was asking after you)! At 8pm we decided we better head to the ground. Just before we set off we had bumped into Jon Vallance and his lot and they were drinking cans from the super market at about 10p a can probably, Jon got himself involved in some sureal conversation with a bloke on the table behind us as to why there were so many English people in the local bars. Jon explained slowly (if in a slightly slurry manner that there was some type of football game going on).

It only took about 5 minutes to pass through the security checks and we were in the ground. Our view was poor, large fences and low seating, but the result was OK. The Macedonians created a great atmosphere,

especilly the "ultras" behind the goal who sang for 90 minutes. The match was a close run thing with England eventually breaking the deadlock. Crouch it was who netted the winner and it finished 1-0 to England.

After the game it was back to the coach park, we were on the 2nd flight to leave Skopje and we were back at Luton for 3.30am this morning.

So its Macedonia at home on the 7th October, then a real test, Croatia away on the 11th October. Anyway time for bed said Zebedee (well after a few hours work)


The following pictures were taken by Daniel Rodbourn 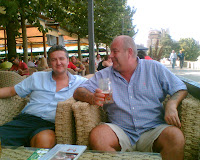 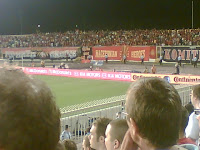 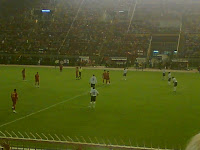