So another fantastic trip watching England abroad. We flew from Heathrow late Friday 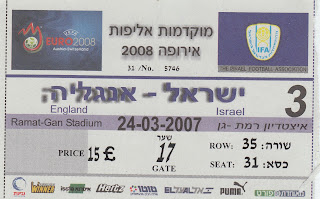 evening and landed in Tel Aviv's Ben Gurion Airport at 5.30am on Saturday morning. 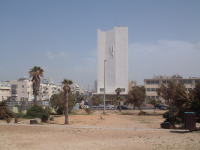 We bumped into a few mates so we jumped into a sherut (a shared taxi) and by 7am had arrived at our hotel.

It was way too early to book in so we put our bags in a secure room and then headed out for a stroll along the seafront. The place was busy with cyclists, joggers but mainly 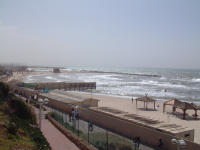 power walkers. We sat and watched the world go by.

The beach opposite was a segregated beach, men and women alternative days and to keep people from viewing they had put up a large fence (this was to become a regular feature of this trip!). We had a coffee to warm up as it was very overcast at this point We carried on walking on the seafront until we got to the old town of Jaffa.

We had to stop for refreshments as by now the sun had broken through and it was getting hotter and hotter. We had a look round the old streets before jumping in a taxi and back to the hotel to check in. 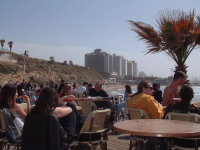 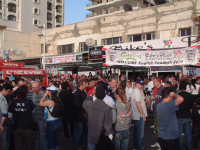 About 4pm we headed out again and had some great food before attempting toget a free bus to the ground. They had put on special buses as all other public transport not running as it was the sabbath. The buses were all full so we jumped in a taxi and 60 shekels later we were at the ground. 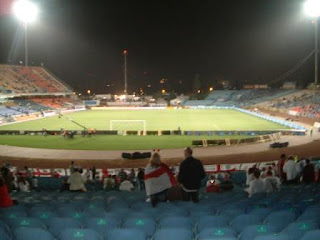 It was a big open bowl of a stadium with various parts not finished. I wont go into the game as I imagine most saw it or fell asleep being bored to death by it! After the game we got the free bus back into town and by the time we got to our hotel it was close to midnight and time for some sleep. 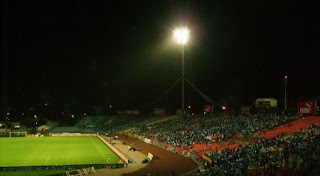 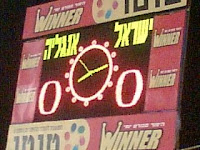 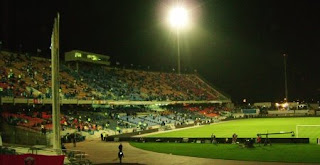 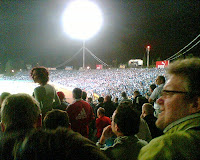 Sunday and everything was open as its a normal working day in Israel. We had booked up a trip to Bethlehem. We left Tel Aviv at 7.15am and headed for Jerusalem. You pass through the middle of the West Bank which is segregated off by fences, but these are being replaced by a new bigger,wider more intimidating wall as they prepare for a new independent state of Palestine. As we arrived in Jerusalem we saw on the news Gerry Adams sitting next to Ian Paisley almost talking sense as we watched the we watched the Israel/Palestinians build divides. Bizarre! We had to switch from our coach to a minibus to get to Bethlehem as it is in the West Bank so most people don't go. We crossed the border and picked up our guide who is not allowed into Israel as has the wrong type of Palestinian ID. 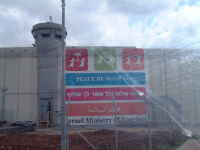 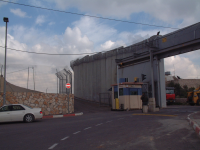 The security point to pass into Bethleham - our guide said we were Italian as that was safer than English and American that was on our trip!


The next few places we saw are all of major religious significance. I am not religious but they are still fantastic places to visit. We started at the field of the Shepherds where the angels first appeared to tell them of the birth of Jesus,

Our guide was called Walide and he was one of the most interesting persons I have ever met.

Next it was on to the actual birth place. They have built a church on the spot and there is a silver star at the supposed spot. There were hundreds of pilgrims about and it was a bit of a rugby type scrum as people became close to the point of punching your lights out to touch the star. 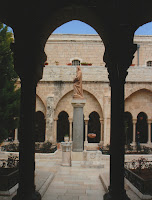 I stood back, slightly bemused as to people reactions. We saw the manger and the spot of the three wise men. It was all a bit bizarre but time to head back to Jerusalem. We left the official tour at this point as Liz's niece is working in Israel at the moment so we met up with her at the Damascus gates in the old town.

Old Jerusalem is split up into 4 main areas, the Jewish quarter, the Muslim quarter (mainly Sunni muslims), the Christian quarter and the Armenia Christian quarter. We wandered through all these and people seem to live in harmony.

We walked round the old ramparts to start with then headed to the Western Wall (the wailing wall), which has the Dome of the rock (the main religious focus for the Muslims) just above it. In the past the Muslim used to throw stones down on the Jewish people at the wailing wall, but that is now all fenced off. Next (after a great meal in the Muslim quarter) we visited some of the 14 stations of the cross ( the route that Jesus was forced to go on to his crucifixion) which ends in the Church of the Holy Sepulchre, a church built on the site of the crucifixion. Once again its all a bit surreal, with 2 separate sights of his tomb depending on if you are Armenian or Catholic. The place of the crucifixion is not open to the public but you can get above the site where once again people become lost in their own world, desperate to get as close as possible.

After this (we were exhausted as walked miles and it was very hot again) we headed to Jerusalem bus station, one place the foreign office suggest that you avoid! You pass through airport style security to get in. We caught the 405 bus to Tel Aviv. On arrival in Tel Aviv you have to go through the same high security checks to get back into the bus station. 10 people were killed by a suicide bomber in April 2006 so you can understand the security! We headed back to>near our hotel and Liz's niece was met by a friend to get a lift home.

Continued in next blog here
Posted by Mark R at 13:10