Saturday was a great day, in the end! We set off from Brighton on the 4am train, there were even a few Brentford lads on the train. They had come down for the Brighton match and done the same as us ie gone out for a night on the town then caught the only directtrain to London due to Engineering works. We were booked on the 7.30 from Euston to Crewe but sneaked onto the empty 6.30 so speeded up our arrival by an hour, well it was a Virgin train so we had no idea what time we would 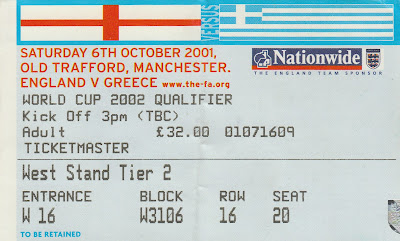 get to Crewe. At Stafford we got held up as a goods train had derailed on the track next to us and as it was sticking out the end of the platform was holding the signal on red. We eventually moved on and caught the 9.54 from Crewe to Manchester. This train was fairly full and there were fans from Shrewsbury, Hereford as well as ManCity and Man Utd all aiming for opening time in Manchester. The train came in via the outskirts of Manchester and we saw the new very impressive Commonwealth stadium. We arrived into Manchester Piccadilly to be met by the Police sticking video cameras in your face and then outside were lines and lines of Police just gagging for an opportunity to get stuck in. As we walked down the road the Police tailed any groups of lads and picked out individuals to be searched etc. We couldn't be bothered to drink around Piccadilly and headed towards Victoria station. We ended up in the Printworks complex and the Lloyds pub. Already seated and drinking cheap pints were the Rochdale lads, who took great pleasure in reminding us they had a nice late start. We also bumped into the Bournemouth lads we had met in Malta a while back, and we were soon joined by a few more of our Brighton mates, the usual Scunny lads, Sara fromCov and Careful Col from Birmingham. A round of 6 pints cost just £9.25 so we managed to down quite a few pints before heading over to Victoria to catch the tram to Old Trafford. It was around 2.15 and we met up with some other Cov lads we knew and joined the queue. This was the first hold up of the day. The first 2 trams for Old Trafford stopped but were held empty as the Police said they were trying to clear the queues at Piccadilly! They did eventually allow us on one, well every one was getting very agitated and the smug arrogant attitude of the Police didn't help!We arrived outside Old Trafford at about 2.55 and once we had walked round to the Stetford end, squeezed our way past the VIP entrance, we were through the turnstyle and walking up the many flights of stairs to the upper tier!We missed the national anthems and the first 5 minutes of the match. Around us were mainly Man Utd fans and a number of people who sat like statues through the 90 minutes and they didn't even really celebrate Beckhams goal. One bloke about 3 rows behind us slagged ever Liverpool player for every touch they had. The best moment was when he went ballistic when Utd reject Sherringham came on. Less then a minute latter and everyone was going mental around him celebrating and somebody even gave him a slap. No one else we travelling with had this sort of problem so I guess out of the 65,000 England fans at the match we had the one idiot who decided club allegiances came before country. No sooner had we got it back to 1-1, we gifted Greece the lead once again. As for the last 10 minutes, well we knew Germany was 0-0 and when the 4 minute board went up we knew we could still do it. When we won the free kick my mate said let Sherrinhgam have it as Beckhams free kicks have been poor. On cue up pops Beckham to curl in a brilliant goal. We went mad as did the lads in front and behind us, my mate then confirmed Germany finished 0-0 so we knew we had done it. A minute later the whistle blew and over the tannoy he announced and the score in the Germany match has finished.....0-0. The roar was deafening and the atmosphere electric. We celebrated back to the metro stop ( I was tempted to stop for a Burger because the food sold out in the ground before half time - complaint to theFA was the response behind the counter!). We got back to Piccadilly caughta delayed train to Crewe and then headed for the nearest pub to celebrate.Every one came back in small groups as people caught the next train back to Crewe. We caught the 7.21 back to London and celebrated all the way backafter visiting an offy in Crewe. The train was of course delayed back into London and we arrived into Euston at 23.35 so just had time to get the underground back to Victoria and catch the 00.05 to Brighton. This was of course diverted and delayed and we arrived back into Brighton at 2.30am, sonearly 24 hours after we left. I have seen England at all the recent venues and I have to say that my favourite for drinking, getting to and from plus atmosphere has to St James Park Newcastle (the furthest from Brighton but the best day out!). I understand Old Trafford was already booked for the play off hence the Sweden game is in Manchester, but I have to say the attitude of that one idiot behind us, and the deadpan non vocal support of many people around us did spoil my match day experience at Old Trafford. My next game will be the away friendly in Amsterdam. I hope they also arrange at least one friendly away in a hot climate before the WC finals, but I guess that may depend onthe Euro 2004 draw.
Right I better dig out my leave card and book June off!!!