Japan! I dont think many of us knew what to expect from our visit to the Far East. The biggest difficulty was the language and directions, I think this road sign just about sums up how confusing everythig was at the start of our adventure!

I departed Brighton on the 5am coach from Pool Valley and arrived at Heathrow just after 7am. My mate Andy drove up from Cowfold and narrowly missed a big collision on the M25, so I met a rather shaken Andy at Terminal 3 for our Lufthansa flight to Japan.

We were booked on the following flights
9.10 Heathrow
11.45 Frankfurt

When our mate Scunny Daz arrived the flight was overbooked so he was diverted via Munich, but he did get 300Euros compensation (I will come back to that in a few weeks!). We met up with Careful Colin (Occasional Birmingham supporter – had a 3 match package at the end of last season and will buy one for next season and there one year season in the Premiership!) in Frankfurt and then embarked on our 12hour+ flight to Narita airport, Tokyo.

3 films, 2 meals, various magazines, the odd drink or too and it was soon………

We arrived in Tokyo at around 10am. We had completed an ‘Aliens’ arrivals card and

then had to queue up to get it stamped into our passports. It took around and hour to get this completed, then it was on to collection of luggage and then queue again to get through customs! The delay was due to the number of ‘Aliens’ n our flight, namely about a dozen England fans, about 50 or so Irish lads and 1 German fan. I sat next to an Ireland fan from Dublin (a Shelbourne fan) who has followed his country round Europe and the World for a few years. After about 2 hours we were through and free, Scunny Daz was already waiting for us with a can of Alsahi beer bought from a vending machine (more on them later). We bought a 5 day travel pass for all of Tokyo for 5,000 Yen (about £27) so headed into central Tokyo following instruction that my girlfriend and another mate had provided as they had gone out 2 days before us. The airport is about an hours train ride out of central Tokyo. We were based in the SunRoute Hotel in Asakusa. We caught a train to Ueno and then had to find the Ginza Subway line and our final stop of Asakusa. We used the same subway stop for 4 days before discovering the stop before was about half the distance away from our hotel than the one we were using! We left the subway and searched for Mr Donut as per my directions. We found it turned left and there was our Hotel. We were soon booked in and met our early travellers. It turned out that there were about 20 Sweden fans staying there as well. The first evening and it was time to get the legs working again after all the flying. The first place that Liz and I visited was the Senso-Ji Temple.

That evening I had my first meal of Chicken and noodles, little did I know the number of times this would be repeated. We found a nice restaurant down by the by the river and the food was delicious. I was soon slurping by Noodles like a local!!

Our first full day in Japan, so time for sightseeing. We headed for Ginza and the Sony Centre. It has several floors of new technology, including 2 floors of play station games. I couldn’t get the football started so settled for a driving game. Despite being a non-driver I still performed better than Liz, but that was because the car couldn’t go as fast as her driving in reality! On the next floor down we were watching some high tech Internet video system and a voice behind me pipes up ‘Hello Mark!’. It was Rich a Coventry fan I first met in Turkey back in 1993! I hadn’t seen him since Marseilles and the last World Cup. It turned out it was his brother who had had one of his twins snatched from Hospital in Dudley! It’s a small world!

We stopped for a meal near the Sony building and our course ended up with Pork or was it beef with noodles in a nice soup! Our expertise in using chopsticks was progressing day by day. They spoke no English so much pointing at pictures and plastic replicas of food and we were sorted. Next on the agenda was finding a store in every guide book, a place called Itoya. It sold stationary may not sound exciting, but occupied 9 floors! As it turned out Liz loved the place the rest of us wandered around slightly bemused!

After this we checked the guidebooks again and decided to head for the Godzilla statue. Scunny Daz got us there no problem, after walking over an amazing kriss cross pedestrian crossing! You had to be there to appreciate it, but we counted about 8 crossings over a major road junction! We also got our first sight of the impressive Japanese Bullet trains. We soon discovered that ALL public transport in Japan runs on time, being late would probably make headline news.


We eventually found the statue, or rather walked past a small statue, wandered round before discovering that what we had found was the real thing! It was a little diddy statue and a big let down., but as Daz said who cares at least we found it! So time for our first group photo at one of the attractions in Tokyo. The other thing we started to notice was the number of people about. Tokyo makes London look unpopulated. Many Japanese people are head down walking and the outside world doesnt exist. If they bump into you and make eye contact much bowing and apologise, but if they can avoid eye contact they will press on without as much as an acknowledgement they have just nearly knocked you down!! 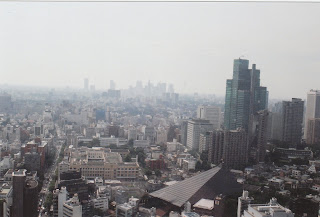 Next it was the Tokyo tower. This is a view overlooking Tokyo from the top of the tower.
After the tower is was time for Ice creams, back via Rappongi, bumped into Stuart Weir (did pictures for a couple of Albion books) Its the first night of matches, so we head for the Sugar High club in Ginza. Its £10 entry but drink all you want! The local Japanese we see drink a couple of drinks and then they are paraletic and fall asleep or stagger off home! We buck the trend and drink to the small hours of the night. We even manage the whole top shelf and at once stage I was on Vermouth!

They had installed a TV to show the game but they could not get a decent signal! They managed to get some sort of signal and we watched Senegal beat France 1-0. A great start to the tournament. Inside Ueon park and Liz finds some neon policeman!!! We all met up in the Hotel lobby mid morning and ventured into the local bars in Asakusa. We settled down at the first stop, ordering 8 beers and some strange food on a stick, I think it was Pork and Onion. We moved on (to escape the heat) and caught the metro to Ueon and the Church pub.

We have a few pre match beers in The Church Pub

Scunny Daz bumps into a Mexican supporter on the underground on our way to the ground.


We sank a few more beers and then headed towards the ground, eventually finding a poster telling us how too! Once you got out of the station is was about a 20 minute walk to the stadium. It looked strange from outside but very impressive from the inside. The roof on either side was enormous. Luckily the weather was warm as our seat were the front row directly behind the goal, both ends roofless (a bit like Withdean but a capacity of 60,000 rather than 7,000!).

I thought we were lucky to escape with a draw, Seaman kept us in the match, but still a point kept us in with a chance of qualifying for the knock out stages! After the game it was back to the station, but they had a strange traffic light system as paths to either end crossed each other. It caused chaos, and it wasn’t helped by every 5 yards a Japanese person with a microphone bellowing out instruction in Japanese. Not a word in English despite about 20,000 Europeans being in the crowd! Once we arrived at the subway it all worked very swiftly and train after train arrived to whisk us back to Ueno and our meeting point if the Church pub. We all drank a few well-earned cold beers. 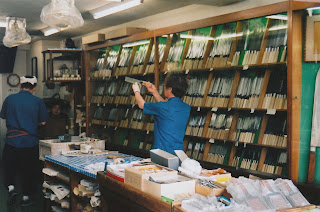 Another market nearby selling all sorts, vegetables, large Knives!!


Today saw the first of our 3 internal flights. We from Tokyo Haneda airport to Aomori, just over half way to Sapporo and on the Northern end of the middle island. We venture out and about in Amori, I dont think they see many westerners and even less tourists. We wander about pocking our heads through various doors and entrances and stumble across a bar, well it was actually a very small Karioki bar!! Soon a couple of other England fans stumble in, Kev and Tony from London. Later in the evening some Argentinian fans join us for a sing song. They look bemused when Scunny Daz gives a superb rendition of a Japanese love song. They look even more bewildered when Kev and Tony do "two little boys" The lovely lady who runs the bar gets some help from Liz. The beer soon runs low but a quick call to her brother and the stocks are replenished.
Posted by Mark R at 03:23