So the last football game of the season (Brighton's first friendly is just 5weeks away!!!)The trip started with Phil Blackman picking me up on Sunday afternoon, thena leisurely drive up to Heathrow before parking the car up at one of thesetrading estate park up and get driven to the airport places. We arrived at Heathrow and had time for a couple of pints before checking in and then boarding our Virgin flight.We arrived into Athens new airport at around 2am, went outside to be confronted with about 500 taxis, got in the first one and we were off,driving speed either 0 or 100, nothing in-between! We arrived at the Athens Central Hotel, checked in and were in bed by 3.30am.

Not surprisingly we missed breakfast Monday morning, but were up around 11am. We ventured out into the city and eventually found a quiet backstreet bar. We ordered a few beers and met up with a Norwich lad, had a few more beers, then decided it was food time. Phil had Squid, Piers had meatballs and I had cheese balls! Strange 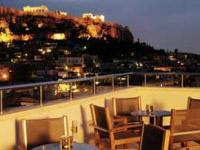 dishes but nice. After that we wandered round, found another couple of bars, but then headed back to the Hotel to try out the roof top swimming pool. There was also a roof top bar with cracking views of Athens and a spectacular view of the Acropolis. That evening we ventured out again, ended up in a bar full of old people (beer was only about 50p!), then ended up in the red light area (by accident of course!). There was a distinct lack of England fans about, and it was all very quiet. On the Tuesday we spent most of the day by the pool, relaxing (with the odd cold beer or two) and Phil got nicely sunburnt. By the time we went out in the evening Phil was glowing! We headed towards the Acropolis and met upwith some Coventry lads we know. There were loads of bars/restaurants in the area known as Plaka and we had a meal, and of course a few more beers. A few more England fans were about now and we bumped into John (Sheff Utd) and his misses (Sheff Wed!!). They are coming down for the weekend when we playthem in the pre season friendly. By now Phil appeared to be suffering from sun stroke, felling hot, shivering and glowing like a nuclear reactor! We returned to the Hotel, and the agony of the musician at the hotel bar!

Match day and we headed back to the Plaka area, and it was soon packed withEngland fans. We met up with the Cov lads again and Brighton fans (andlistees) Andy S and Kev K. The beers were soon flowing and we met up withthe Northampton lads, and got talking to a few Rotherham, West Brom and aload more Coventry fans. The square was soon decorated with St GeorgesCrosses (including Phil's A21 flag). Around 8pm we decided to head to theground. We caught the metro and about 30 minutes later arrived at theground. The Northampton lads had got off the stop before for a final beerand apparently all hell broke loose. Gary got hit on the head with a bottleand they then got baton charged by the Police and put back on the nexttrain, glad we hadn't got off!We got into the stadium about 9pm and stood on the side at the back, asuperb view, and amazingly an almost empty stadium. 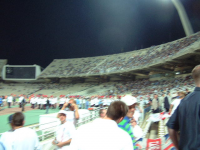 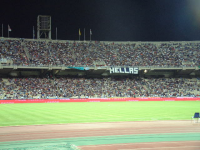 The ground gradually filled up and I would estimate around 8,000 England fans turned up - 4,000 with tickets, 4,000 paying on the day. We met up with fellow Brighton fans Worthing Liz, the Fatty Taxman and Ashford Steve as well as Dogsy (Palace),Scunny Daz and Villa Colin.I wont comment on the match as I imagine most people saw it. Beckham was brilliant and he milked it when he scored. I think the 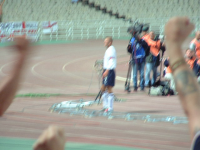 stick the Greeks gave him when he took corners near them just spurred him on. At the end hecame over and was loving it, despite the few Greeks on the pitch trying to get his shirt off him. We were held in for around 45 minutes but the organisation for once was good and they had metros waiting for us to run us back into the centre of Athens. I saw Clive (Harts Shirt from North Stand Chat) very briefly but then our metro was full and we were off. This was the only scary part of the trip. As our metro approached the first stop back it came under a hail of missiles, the bricks smacked into the windows.The riot Police held their shields to the windows and ordered everyone onto the floor!!! The train moved on but we later learnt every train was attacked and in the one behind us several windows shattered and a few people injured!We decided to not risk Plaka afterwards but instead went back to the 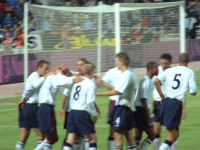 Hotel bar. It was soon packed with happy England fans and I vaguely remember staggering back to the room some time around 4.30ish. During the evening we met up with Tim and his girlfriend (Everton fans but live in Brighton) and their mates who we see at every England trip. We got talking to 2 Rotherham fans who had been on our Albania flight, (they had spent the night at Heathrow after Olympic air cocked up our flight). It was a great night and the cold bottles of beer went down a treat. Any and Kev crashed at our Hotel as they had left their wives/families on Aegina and the first ferry wasn't until 5.30am!

The next day was very quiet, we had a meal at lunch time but had to get a taxi back to the airport early afternoon and landed back at Heathrow ataround 8pm.