LUXEMBOURG AWAY – THE CASE OF THE COOKER AND THE MISSING BITS!

Four optimistic people set off on the 10.27 Eurostar from Waterloo to Brussels after 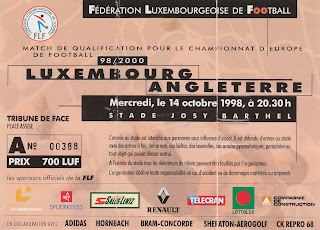 the attacking, thrilling, goal feast against Bulgaria on the Saturday. Mmmm – perhaps I’d better start again. Four Brighton fans set out to Luxembourg knowing that a good time was ahead apart from possibly the football.

We arrived in Brussels around 2pm after consuming a can or two of beer on the train (£1.80 for a small can!) and the first thing we did was buy the return tickets

from Brussels to Luxembourg – only £32 for a three hour train journey – not bad.

After buying the tickets we headed for the Grand Place – the main square in Brussels. It’s pretty spectacular, so as we had arranged to meet Liz’s niece at 5.30 we had time to pass so headed for a bar and then a quick snack.

The less said about the first bar the better – other than to say the barman became a barwoman and it was time for us to leave. We met up with Lulu (Liz’s niece) and 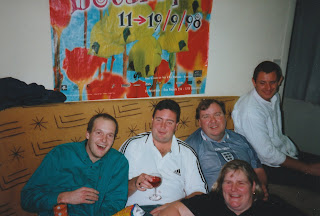 headed back to the students apartment they had – now this is were Peter (Fatty Taxman) Canning had his first problem – it was on the fourth floor of the apartments and there was no lift! We made our way up and sat down and waited for Peter to arrive – by then the red wine was open and the food cooking.

After the meal and red wine and beer and a Mandarin liqueur, we headed in to town – a good traditional Belgium bar – well it was actually called O’Reillys – so I set about the local beers – well a few pints of Guinness.

By now we were all knackered from the travelling and the beer.

The state we were in was highlighted by Nick (Bart) Bartholomew who promptly chatted up a lovely looking lass from New York. Her lisp was sweet and the comment ‘well if she had a shave she would be alright’ summed it up. Nick we still await the development of the photos as you are claiming memory loss!

We headed home around 1.30am, but near the apartments Nick and Peter headed for an all night bar. They finally arrived back about 3am – they had got a taxi back and

had been driven around for a while as all they could remember for the apartments was a blue curry house opposite. Needless to say the taxi driver was a bit bemused – but he amazingly did find it in the end. Nick walked in to the room, fell over the arm of the sofa and din’t move until morning – Peter just lay down on the floor.

The next morning we surfaced feeling slightly worse for wear – apart from Liz who never has a hangover. We headed back to the train station to meet Jason Fenner and brother-in-law Bill. Once again the day was similar to the last, we feasted on spicy sausage and mash in the evening and then headed out with Lulu and two friends to a 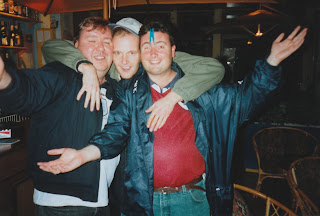 traditional Belgium bar this time. I have never seen so many varieties of beer in my life. Jason tucked into Kwak (a strange beer served in a strange glass – similar to a small yard of ale glass, when you get to the bottom it’s supposed to make a Kwak sound!). I sampled a few different beers – cherry, banana and various others but the memory is hazy.

We walked further in to the centre and walked past the famous weeing boy (lucky it’s not in Withdean as most of the water was spraying on to the pavement).

We finally headed back around 2am and this is when Peter came into his own. His first problem was the stairs which he manage to trip over, luckily only about two stairs up. Around 4am Peter surfaced from his mattress and after several attempts managed to stand up. Now I understand it was dark and the layout was unfamiliar but the next few minutes will go down in history.

Now to reach the toilet you head straight ahead and you are there. To reach the kitchen you have to turn left. He ended up the other side of the kitchen where Liz was sleeping and finally turned round and headed back into the kitchen. The first crash was a small one (a few plates we thought) the second rather louder (did they really have 17 saucepans all with lids) the third had everyone thinking World War Three had started.

I couldn’t face getting up to see the carnage – luckily Liz and Lulu’s flat mate Jonathan did. What did they find? Well they used to have a gas hob on a table – well Peter had obviously taken a fancy to it, as the hob was now in the room next to the kitchen in several pieces on top of Peter!! In the day light the next day we still couldn’t find all the pieces so it looks like cold food for the rest of the term for them!

We had planned to get the 8.36 from Brussels to Luxembourg but no chance of that. We eventually made the 11.36 and the thoughts turned not to the match but attempting to catch up on some sleep (as Peter not only caused carnage in the kitchen but also snores rather loudly – I think the neighbours confirmed that).

We arrived at the first station in Luxembourg where the train was delayed for 20 minutes by a few riot police. Their attempts to intimidate us failed as the first police dog was all bones, the second was not much bigger than a poodle. As the police paraded up and down the station everyone was just cracking up.

After arresting three bottles if gin from one England fan they let the train continue on it’s journey. Once we got to Luxembourg station more fun began. Unless you had a match ticket, travel card and passport you couldn’t get off the station immediately. It took around 45 minutes while they checked the hooly list and then we were all back together, but as Liz, Bill and Nick headed out it appeared they were headed for the mobile police cells which had been waiting outside. After much arm waving and the idiot in charge shouting out they let them go. They were clearly unorganised but doing everything they could to intimidate us.

We headed for the bars in town – all full of England, most without match tickets. We found a bar with a pool table and table tennis and that gave Peter (Ping Pong) 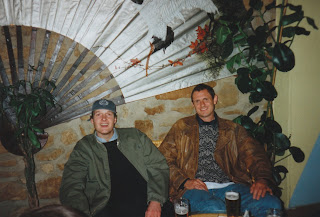 Canning the chance to show us his stuff as he claims to be a table tennis expert. Needless to say the ball spent more time on the pool table than the table tennis table!

We ordered some taxis and arrived near(ish) to the ground. Loads of ticketless England fans were milling about – there were no tickets going around which is unusual. We headed into the uncovered terraces (Peter fell over in a puddle before he found his seat) and we gradually got wetter as the game got crappier and crappier.

healer – in case people have been asleep for the last few months).Hoddle came in for plenty of justified stick especially when he used Robert Lee as a sub – why not a

After the match much to our surprise Luxembourg was still open and no sign of a riot. We had a few more drinks and then caught the 12.30am train provided by the Luxembourg authorities to get rid of as many fans as possible.

We eventually arrived back in Brussels at 4am. Now our Eurostar was not until 5pm so

we had a few hours to kill. We found an all night bar but only Jason could face alcohol. By 6.30am we were either falling asleep or bored so we went sightseeing – in the rain, fog and the fact it was still dark, but we carried on undeterred. We saw Hysel (just), the Atonium (I think you could see it in the murky weather – the pictures will be interesting) and then headed back to find Peter who we had left in the bar.

We went back to Liz’s niece’s house about 8am and promptly went to sleep. We got up around 1pm and headed for some food and then the Eurostar home. Jason managed a final piece of stupidity and slipped down the stairs at Clapham Junction – well you can’t let Peter take all the glory!

Roll on Bulgaria away in June!!

Some England fans caused trouble at France 98 Authorities in Luxembourg are hoping to ensure that hooliganism does not mar England's European Championship qualifier on Wednesday.
About 1,000 Luxembourg police officers have been put on stand-by to deal with the estimated 2,400 England fans with tickets who will travel to the game.
They will be trying to avoid a repeat of the ugly scenes in the country after another Euro qualifier between the two nations 15 years ago.
On that occasion England fans went on the rampage throughout the town despite a 4-0 victory. It prompted the local mayor at the time to state he would rather Luxembourg pull out if they ever drew England in the competition again.
That has not happened, but the local authorities are also mindful of the trouble caused after last month's clashes in Stockholm.
Fans hurled racist abuse at Sweden midfielder Henrik Larsson and caused damage in the stadium following England's 2-1 defeat. The trouble led to UEFA fining the Football Association £27,000.
FA's concerns
The FA's special adviser on security Sir Brian Hayes said: "All available man power of the local police and gendarmes in Luxembourg will be on stand-by for the game.
Sir Brian Hayes: Tracking the hooligans"There is always a worry now when we play abroad with the trouble at the World Cup and then the trouble at Sweden which we didn't really expect.
"From a security point of view I feel reasonably comfortable with the ground and it won't be like Sweden when fans were high up, able to cause damage and difficult to identify.
"From that point of view things are in our favour but nothing surprises me now. I never rule out the fact that there are some mindless people who are just hell-bent on causing trouble."
Sir Brian said he expected the potential for trouble would be reduced by the fact that many fans were expected to go straight back home after the game.
"But there could be a problem in that a fair number of people are coming to the game by train - and at the moment there aren't a lot of trains out of the country after the match," he said.
Sir Brian added that the FA and police were trying to identify any potential troublemakers before they left England so the information could be given to the Luxembourg authorities

It a list of items not permitted into the ground it includes "Ladders".

Well they must know something I dont - I have to say I have never seen the England hooligans carrying ladders - perhaps this happens a lot in Luxembourg.