Well what a great few days. Not so great was getting up at 4am Friday morning to head to Gatwick to get our flight to Bratislava. A couple of mates came up on the Thursday night and after a few beers we moved on to the toffee vodka, now that is way toooo easy to drink and as we had the early start only had a few of them!!! We landed about 10.30am and were soon on our coach and heading towards Vienna. It was bitterly cold and a few snow flurries but nothing too bad. The journey started slowly as the motorway was closed for roadworks so it was minor roads on a detour. It continued to snow and the scenery gradually disappeared as the 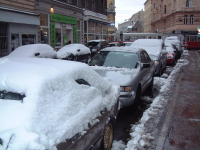 lying snow got deeper and deeper the further towards Vienna we headed. We finally got dropped in the centre of Vienna about 1pm, and were not due to be picked up until 7pm for our transfer to the ground. We agreed that we would head to a bar if it was
a) Snowing
b) cold
c) errrm anything else!

and as it was definitely a+b we walked about 100 yards and found a bar. 3 euros for a big beer, so we decided a couple of swift pints and then the next bar. I think it was about 4 hours later we finally found the exit again! On to another bar and yet more fine beer, then back to the first bar as it was closer to the coach pick up point and it was bl**dy freezing outside! When we got back to the bar we realised that if appeared to be full of only men, oh god I think we had spent 4 hours in a gay bar!!! Oooops!


At 7pm we staggered back to the coach. I think we got to the ground about 8pm, but things are hazy I felt rather worse for ware but within 0.2 of a second of getting off the coach I sobered up as the cold hit home. It was -7C which probably explains it! 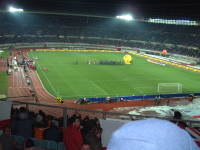 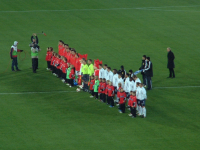 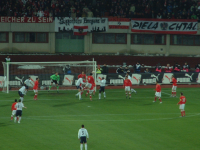 The teams come out and the match starts but boy is it cold. At the start of the match the away stand is full (see below) 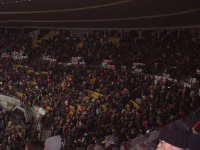 I would guess about 4,500 England made the trip, and the game was awful. Owen got injured and Crouch scored the winner in an otherwise forgettable game. I spent 10 minutes of the 2nd half in the food queue as it was next to a big heater! 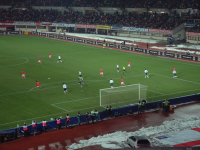 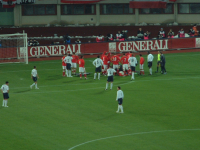 With about 10 minutes left I reckon that there were probably less than 1,500 England fans left in the ground! After the game it was straight back to Bratislava and for our 1.30am flight back to Gatwick and I was dropped home at about 3.30am. 8am and it was back to the station as Liz and I headed to Orient.

By just after 10am we were in the Weatherspoons in Stepney Green, then on to Leyton for the Orient game. It was a cracker. The game (Which was live on Sky) could have

gone either way but I was happy with a draw. The 2nd half was the most entertaining game of football I have seen for a long time and the atmosphere was great with the 1,200 Albion fans in good voice. The Orient fans were quiet but still noisier than normal and the ground now having 4 sides helps keep the noise in the ground. After 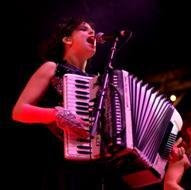 the game it was back to the Birckbeck pub in Leyton for a few beers. We then headed to Whitechapel to watch the Scotland game (I wont gloat until after Wednesday) and then me and a mate headed to Alexandra Palace for an Arcade Fire gig. It was a cracker, helped by everyone celebrating the Israel win over Russia. Bumped into a few mates at the gig and everyone was happy and grinning like fools (which we all are!!) I think I got home about 2am again and I was badly in need of 24 hours sleep, food and coffee! I have to thank some kind people on the train who woke me up around Redhill (they were waking up everyone who was asleep to see what stops they were after) or I would have found myself in Horsham rather than getting off at Three Bridges!! I even had time to eat the rest of my kebab and chips which were a little cold but tasted fantastic (did I really drink that much!!) Roll on tomorrow night and the Cheltenham game and then the big one on Wednesday night. So a BIG BIG thank you to Israel, Nicky Forster, Tiny Cox, Arcade Fire and fine German/Austrian beer for a great weekend!!


Some pictures taken on my mobile phone 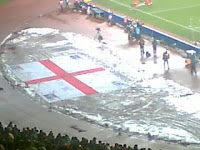 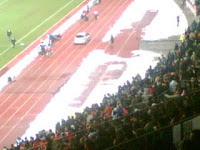 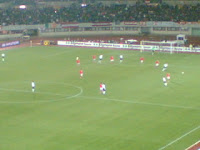