A v Italy (Friendly) - From Turin to Aldershot (via Milan!)

So another few days abroad following England, followed by the excitement of the FA Cup and then the nervous anticipation watching the second round draw! Our latest venture started on Tuesday evening as we headed up to the Burrells in Haywards Heath to watch the U21 friendly live from Monza before heading to listee Andy S's place in Cowfold as we had a 3.30am departure time to drive up to Stansted. (Cheers for driving up Andy!) The U21 matchlasted 10 mins before being abandoned due to fog! We arrived into Stansted just before 5.15am and boy was it cold. The cars in the long stay car park were frozen solid and we were the same despite only a few minutes wait for the bus to the terminal building. Our 6.30am flight to Milan was only half full and we soon nodded off and woke up just before landing. On arrival in Milan at 9.30am we went straight to the train station and for just £10 booked our return train tickets from Milan to Turin. (cheap as it takes 1 ½ hours on an express train). We decided to delay our arrival in Turin as we had been informed a 24 hour beer ban was in place, so settled down for a beer or two before catching the 11.20 from Milan. We arrived in Turin and dropped our stuff off our Hotel. We met some mates (Scunny fans!) before heading out in search of food (and drink). Everywhere appeared shut and after about an hour walking around we were just about togive up. Phil B then spotted a beer glass as we passed a small back streetbar. The 6 of us wandered in and what a result. The bar was quiet but soon a local madman arrived and engaged us in a strange conversation. He bought all of us a beer and then got up and left, top man! The bar also supplied free sandwiches and they accompanied the beer very nicely. We set of for the ground around 7pm (8.45 kick off) and by the time we had flagged down two cabs we were dropped off outside the stadium at around 7.45. That's when the fun began. England fans were arriving in small groups and the waiting Italian mobs were loving it. As we were dropped of a huge roar went up and the Italians attacked a couple of England fans (in shirts) walking across the car park. We veered to one side and mingled amongst people queuing for food! We eventually risked attempting to get to the away entrance but two lads called us back as they had just been attacked walking around that corner. We were well and truly snookered! At last a couple more England fans turned up and we risked moving on. Once we gotround the corner it was a nightmare. They spotted us straight away and they started by throwing one of those rather loud bangers in the middle of us. That split everybody up and they then charged with chains, belts with buckles and bloody baseball bats. Most people got a few slaps and I was luckily pulled into the ground (Italian section of the ground) by some Italians who saw what was happening! It was a nightmare. The Italians turned their attention to the Police and had them cornered. Bricks, rocksand fire crackers rained down on them and a small group of Italian schoolchildren were caught in the middle but that didn't deter the Italian nutters! It only lasted a few minutes (probably 5 at most) but it was a little bit scary! We eventually met up inside the away end (I got my own 2 man police escort around the ground and into the away end) and thank god for mobile phones as the others had regrouped outside but I was missing! They were relieved as I was to find out I was still in one bit and already inside! Everyone was high on adrenaline and Phil B was most upset as when everyone split up he was passed by a speeding Fatty Tax-man. Being out run by the Fatty Tax-man eh Phil? Get down the Gym mate! The game passed of peacefully but one lad who was wearing a white stone island jacket (worth over £400 I was informed) was gutted as he had beencracked on the head and had bleed all over it! As for the match we played well but why the game was ever played in Turin is beyond me. Juventus fans will never forget (or forgive) Heysel and they were hell bent on revenge. After the game they provided free buses back to Turin centre so there were no problems as there were around 1,000 England fans bussed back and no one was risk attacking that many together! I would have estimated that between 2,000 and 3,000 England fans made the trip - not a bad turn out as the crowd was only just over 22,000.In the ground the Italian fans were split into two factions. Torino fans at the end by us and Juventus fans at the other end. They spent most of the time abusing each other. Despite the low crowd the atmosphere was still good. 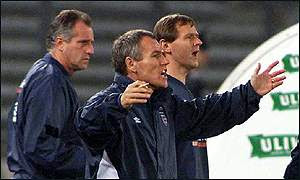 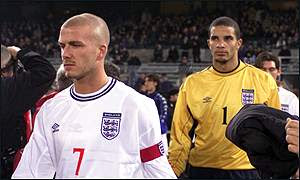 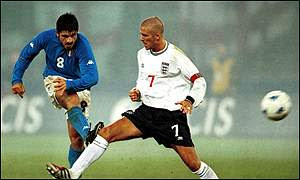 These pictures show Peter Taylor in his only game in charge. His first decision was to make Beckham captain. Unfortunately we lose 0-1!

The next day was much quieter and we had a look around Turin and everything had reopened. We headed back to Milan with the intention of going to the San Siro, but the weather was dreadful so we did not go.We arrived back at 7.30 Friday evening into Stansted (1 ½ delay in Milan)and thoughts turned to Saturday. We drank in Farnham so missed all the problems. After the match we remained in Aldershot for the cup draw and had a great evening, shame about Scunthorpe draw! I headed back with Jonny Rutter and Lulu but have no recollection of what time or route we took back!Any ideas Jonny?