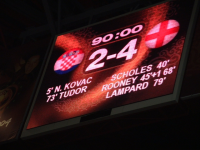 I flew over on a day trip for the Croatia match, had to check in at 5.45am at Gatwick for a 7.25 flight. By 11.30 I had met up with Phil & Piers and we set up camp in a bar just off Rossio Square (which was decorated in about 100 St George's crosses of various different clubs, Luton, Watford, SheffWed, Mansfield, Northwich, Leeds, Everton, Tottenham, Bristol City, the 5-0 Palace flag (boo), Sutton Palace, Arsenal, Hastings are the ones I can remember), opposite the big statue. The bar was at the top of a flight of stairs on a hill leading away from the square so my 16 foot St George's Cross was soon up and could be seen for quite a distance! The plan worked and we must have spoken to about 30+ people from Brighton including Stuart Adams and his family (runs A21 supporters

club), some of the Hikers Rest boys (they had a flag hanging up on the road fly over near the stadium as well), old listee Andy S and his mates, plus various other Albion followers. There were soon most of our regular lot together passing the hours in the sun sipping the occasional beer and some food. About 5pm we headed to the metro and met up with some more Albion fans near the ground (hello Joel and your Chesterfield mates). Some Bristol Rovers fans wanted a picture with our flag so they could remind there City mates of a couple of weeks ago! By 6.30 we had passed through the security checks, had our picture taken with the Eusebio statue and were soon in our seats. 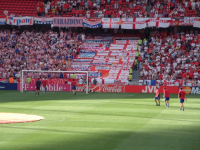 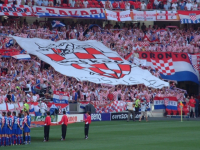 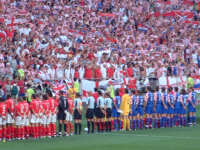 We were in the sunny corner where Rooney celebrated his second goal. The 40,000 England fans were in good voice, as were the 15,000 Croats which made for a great atmosphere. It was great to see fans mixing freely all day with no trouble at all. As for the game, I thought it was a classic. England played some great attacking football and my MOTM was Ashley Cole. 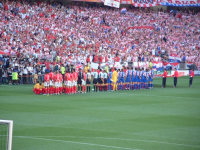 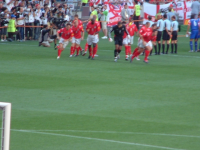 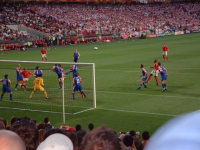 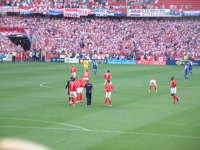 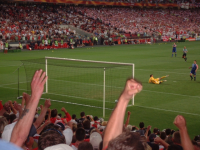 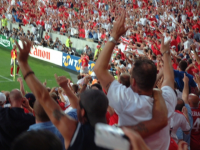 Sadly it was back on the plane to the UK leaving the others in Lisbon.


Roll on Thursday, I have just booked another expensive day trip as down to my last couple of days leave, I must see my boss about having unlimited holidays!!!!! 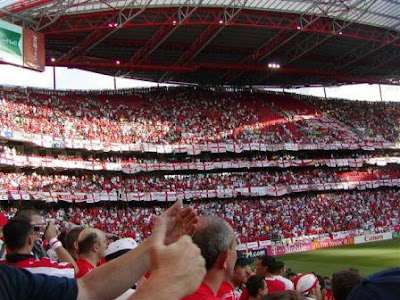 I had been inside this ground back in 1987 and I have to say that the revamp done for this tournament had certainly made this on impressive stadium!
Posted by Mark R at 19:48