Blogger have changed the templates - so may take me a while to get this formatted correctly!

Tuesday 16th October
Due to a lack of holiday I opted to go on the Sports Options day trip from Gatwick.  I met up with Garry and Terry at the airport and soon headed into the Weatherspoons air side with another Brighton lad Mark once we had checked in etc etc.

Our flight was 7.30am so the 6.30am beers went down suprisingly well.  We had a traditional breakfast to help!  It was soon time to board our Thomas Cook plane for the 2 1/2 flight to Warsaw.  The first thing we got was another cooked breakfast :-))

So with the 1 hour time difference, waiting for the arrival of the Manchester flight it was about 12.30pm by the time we were dropped at the Marriott hotel, the ticket collection or englandfans sign in point.

We met up with Kev and Fiona and it was time for beers and vodka!  We started in the expensive Sport Bar next to the hotel, but soon moved on.  Michael another mate soon phoned and we met up in a small turkick restaurant bar.  The Tykske (sp?) was a bit rough so moved on to the Lech which was nicer!  The weather was starting to deteriate and we decided to jump in a cab to the old town. 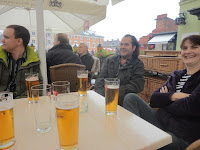 We soon arrived and you get a fantastic view of the stadium from the main square - well you would have without the driving rain and mist!  We settled down in the first bar under the nice big umbrellas, but even they struggled to cope with the rain and regularly dumped water onto unsuspecting people!  We soon moved on to the next square and time for some food.  It was great stuff and the local dark beer rather excellent!  When we told them it was Terrys birthday they turned up at the end of the meal with a round of raspberry vodka shots and a birthday cake (it was Terrys birthday the next day but close enough!).  We then moved onto a different bar and had a couple more beers before moving on again to a underground bar.  Thats were it went downhill, one it was full of Palace fans and 2 they sold cheap shots of lemon vodka! After 1 or 2 or possibly 3 we moved back to the bar we had been in before and trapsed through the puddles and driving rain!  Time for some "Christmas" vodka as we called it - think it was an orange flavoour variety reccommended by the bar man!

By now we decided we better head to the ground as kick off (mmmm) was only an 1 1/2 away.  We jumped into some cabs and were soon splashing our way to the away end.  Showing tickets for the ticket check and then to get in through the gates left it one big soggy mess in my pocket.  We finally got into the away section to be greeted with a flooded pitch and the ****ing roof still open - what a joke.  We knew then the game was off.  We waited around getting more info from people at home than in the ground.

At 9.45pm (local time) when it was finally called off (after watching the fnal pitch inspection which saw the ref drop the ball into a big puddle and walk off) we headed back to the airport for those of us on the day trip and back to the hotel fro Kev and Fiona.  The game was confirmed at 5pm (local time the next day) but that was no good to many people.﻿
﻿
﻿
So back to the airport and a ray of hope as Sport Opts asked for those that wanted to stay to gather.  About 80 of us did but when they said they could get Jet2 back the next day but only to Manchester (then a coach to Gatwick) about half dropped out. This left 39 of us (probably the 39 who had drunk the most Vodka!), but hats off to Sports Opts as they said **** it we will do it, see you all at 9.30pm after the game tomorrow - £150 for the new flight!  Done.  Mark and I jumped into a cab with some other lads, we met his mates in a bar and we crashed on there hotel room floor.

Wednesday 17th October
Yuk, I woke up feeling not great, in a room with lads I didnt know, in a hotel that I had no idea where!  Excellent stuff, bit like the old days of sleeping on the floor and massive hangover! 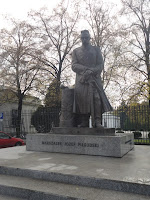 I thanked the lads for the room and walked the 5km back into town, the outskirts of Warsaw is very green and actually really nice.  I soon met up with Kev and Fiona who had ditched there 4pm flights and they had also booked the Sports Opts flight back (in the end 99 returned on the flight so hopefully Sport Opts covered the cash they had risked!) 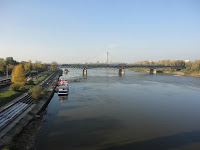 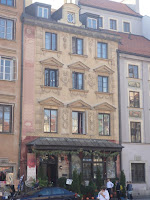 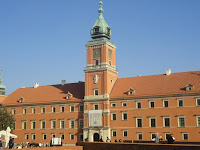 So this time it was a 5pm kick off and and still a glorious day so headed to the ground pretty confident it would happen this time. I think they said around 800 had remained out for the game (from about 2,500 the previous day), so 800 mainly badly hungover Engand fans watched us struggle to a 1-1 draw. Rooney put us 1up but Poland pressure paid off and Harts error gifted them the draw. The Match
﻿
﻿ 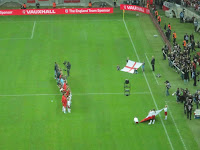 So final after the game we headed back to Kev and Fionas hotel, picked up there bags and we jumped into a cab to the airport. We were soon on the 9.30pm Jet2 flight to Manchester.
As soon as we landed a coach was waiting and in the driving rain we headed towards Gatwick, We dropped various people incl Kev and Fiona on the junction nearest to Luton airport, next we dropped people at Scratchwood services and at about 4am arrived back at Gatwick!