So after returning from Cyprus (I ran the Limassol marathon on the Sunday) late on Tuesday night, it was soon time to head to Heathrow for our German Wings flight to Dusseldorf.  Despite a crash on the M25 we still arrived with plenty of time to spare, so time for a breakfast and beer (or coffee in my case) at London's Pride the Fullers pub in Terminal 2. 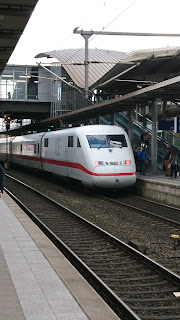 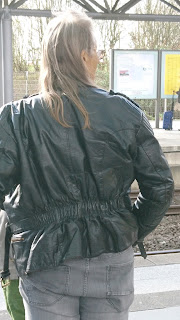 Our flight was about 45 minutes late so the planned 3pm train from Dusseldorf to Dortmund soon became the 4pm one.  Once we had ploughed through 900 screens we had booked 3 standard singles on the ICE train.  Before you could say welcome to Germany we were greeted by the compulsory man with a mullet.  Super stuff.  We met up with Coventry Sara and were soon on our way.

We took advantage off the buffet carriage and were joined by fellow Brighton fan Martin.  4 Bitburger beers were soon on order.  They took a while to serve as a little frothy, but it was worth the wait. The train took just over 45 minutes and in good old train tradition was late, so we missed the ticket pick up option in central Dortmund, we would have to leave that until later at the ground.  Oh well time for more beer instead. 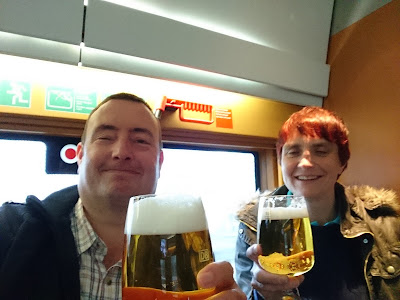 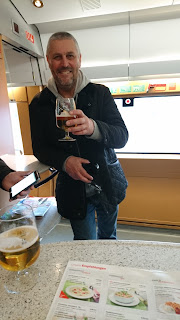 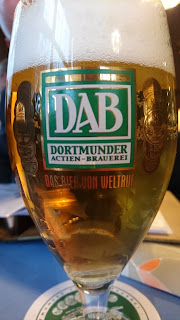 As already mentioned we arrived into Dortmund a few minutes late, jumped into a cab, had soon checked into our very plush hotel.  We get a free beer on arrival which was nice, even if they were tiny (0.2 of a litre) but decided to head out to find something to eat.  We found a great restaurant and soon had food ordered and local DAB beer lined up.  The place was mainly Germany supporters but a few other England lads soon turned up.  Before you could say yet another beer please, it was time to head off as we still needed to collect our match tickets. 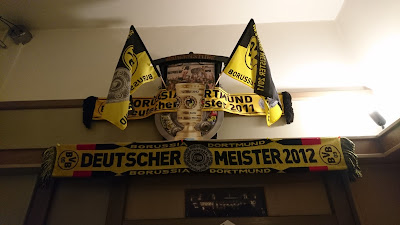 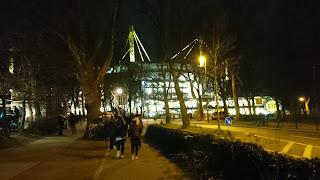 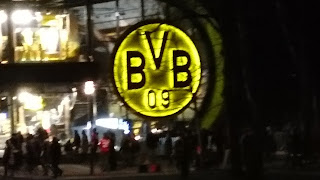 It was a long way up to the upper tier and we soon bumped into Ciaran, Lewis, Deano and Scott.  As it was a friendly beer was on sale so along with most of the other 4,000 England fans we tucked into another pint or two.  The ground is superb and the England fans in good voice. We ordered another beer and made our way up to the back of the away section.  The famous yellow terrace was sadly all seater tonight, our corner was rail seats as I think its the usual away terrace in German league games. 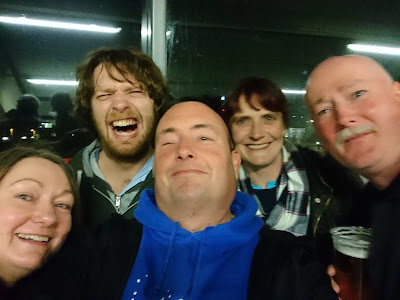 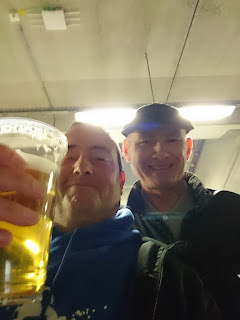 Enjoying a pint with Dean 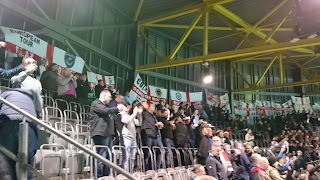 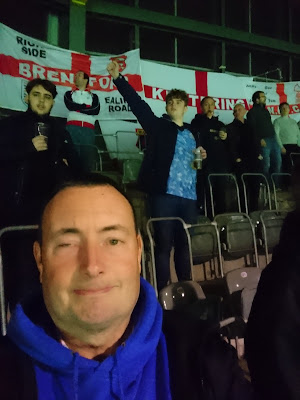 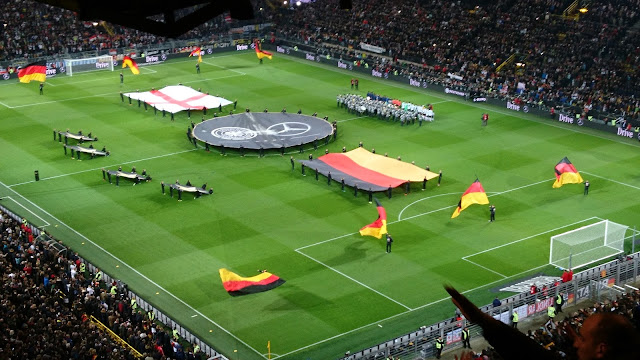 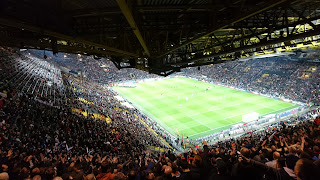 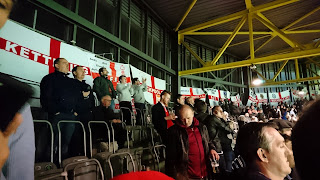 I thought England played well, but as it was Poldi's last game we let him score the only goal of the game.  We headed back to our hotel bar as it was very close to the ground.  We met up with the Rugeley lads and the beer was soon flowing again. The media were staying on our hotel, soon Giggs, Hoddle and Ian Wright turned up.  Giggs went straight off to his room but the others tucked into a buffet.  Wright was greeted like a hero.  On his way back to the lift I grabbed a selfie with him. To be honest it was now about 3am and I was feeling the pace.  The Rugeley lads headed back to there Hostel and I headed to bed.  Kev and Fi had sensibly gone up earlier. 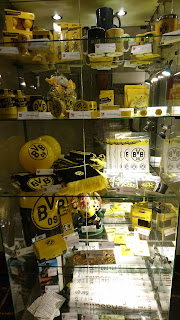 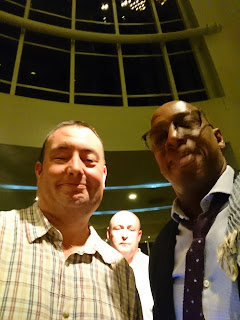 I woke up with a shocker of a hangover, yes I know its all self inflicted so am not asking for sympathy.  Anyway we had planned to meet up about 9.30 at reception and then head back into Dortmund for breakfast.  To be honest it was a struggle for me, we started by heading back towards the ground before walking back into the city.  Being very traditional we headed to a McDonalds for breakfast, I was still feeling pretty rough but did manage a little food and a large strong black coffee.  I really am a drinking lightweight these days. 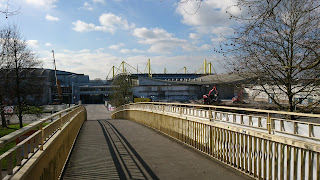 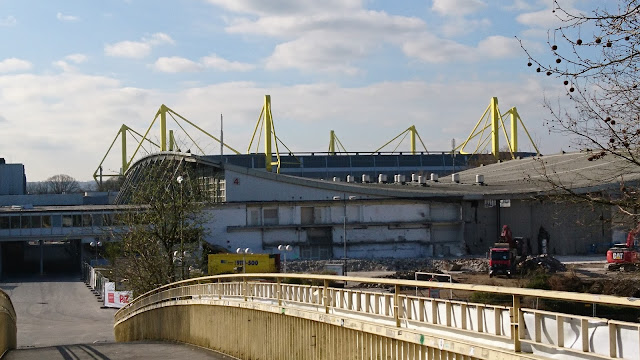 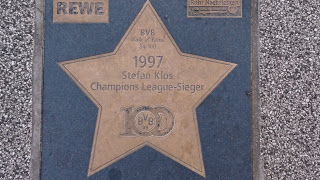 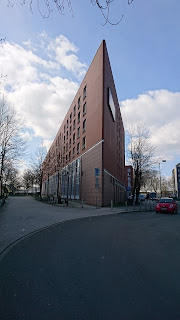 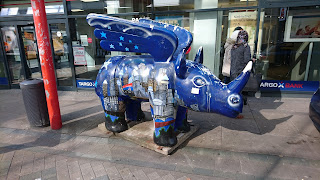 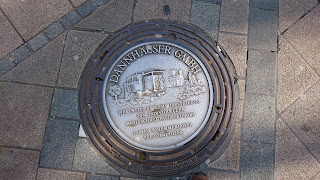 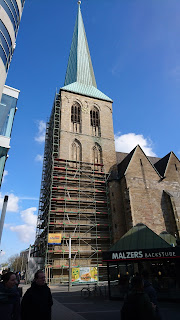 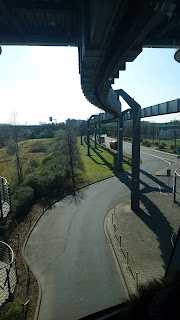 We were flying back at 14.35 so soon headed back for the 45 minute train trip back to Dusseldorf.  A short but sweet trip, Paris is the next away trip, but have to say I am this stage undecided about going.  I think we will look at booking Malta up next.  Dusseldorf airport had a very posh sky train connection from the station to the terminal, perhaps we could have one of these in the UK to connect Gatwick and Heathrow!  The airport also had an unexplained large Giraffe as well! 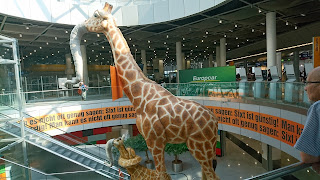 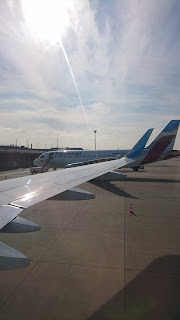 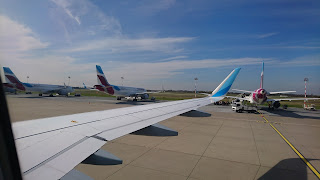 So another trip done and dusted.  The trip was overshadowed by the events in London.  The terrorist scum will never stop me travelling the world.  We all have to stand together against extremism. 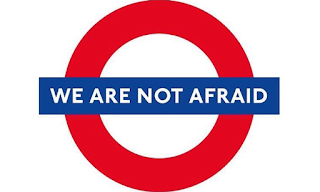