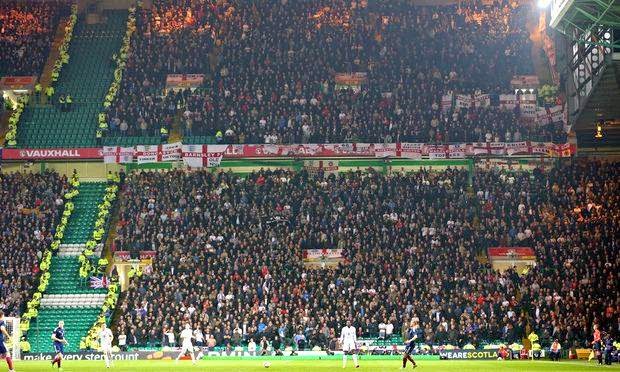 
So after the 3-1 win over Slovenia in the Euro qualifier on the Saturday, it was off up to Glasgow and the surprising choice of Celtic Park for the  "friendly" verses the old enemy.  I opted for a short trip so it was up early on the Tuesday morning for the 9.05 Easyjet flight from Gatwick to Glasgow.


After collecting the tickets we moved on to a great pub called the Blackfriars, next stop was to the massive Weatherspoons the Counting House (were we drank before the 1999 Euro Play Offs match).  We then arranged to meet some other mates in a bar called the Committee Rooms.  The plan of taking it easy before kick off had by now gone out the window.

Drowned out in the Counting House 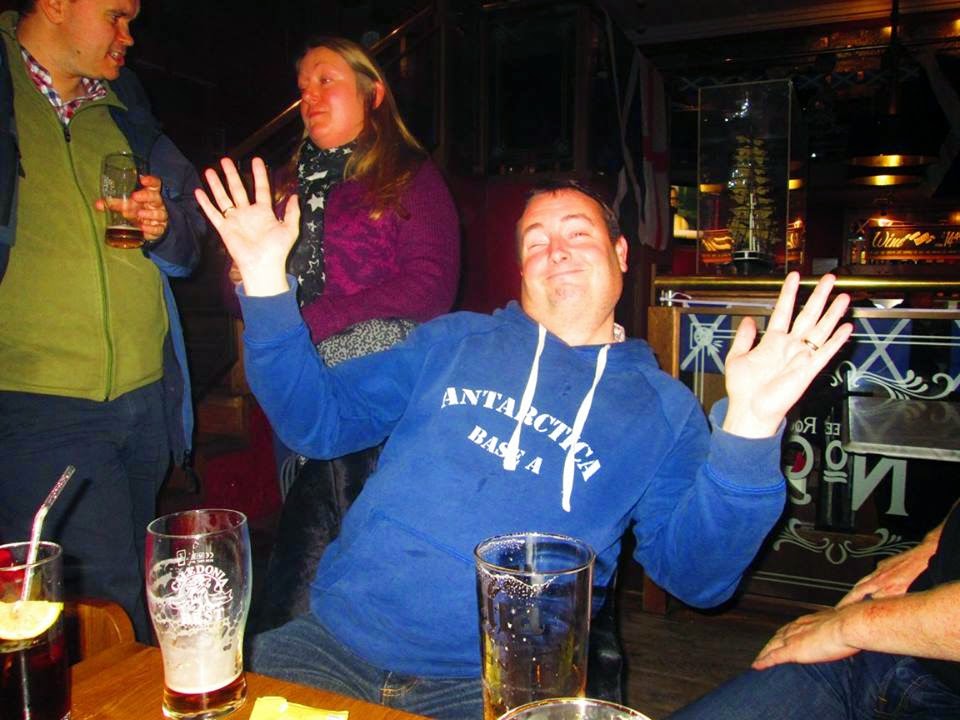 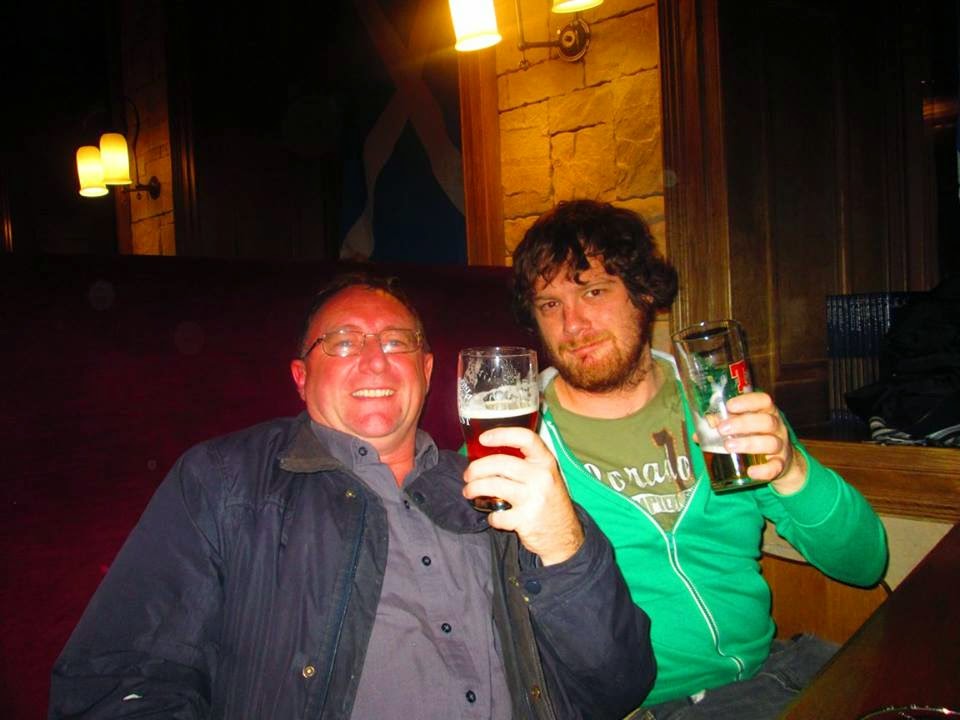 At about 5.30pm we decided to head towards the ground so headed to the station (via the Christmas market and oh a really good idea a glass of mulled ginger wine), and were soon at Bridgeton Station.  There are various pubs outside and they are all Rangers pubs despite being in the East End of Glasgow and just a 15 minute walk to Celtic Park.  The pubs were all rammed!

The first pub was heaving so we decided to move next door to the Station Bar.  It was superb and we settled down for a few more pre-match pints before heading to the ground. 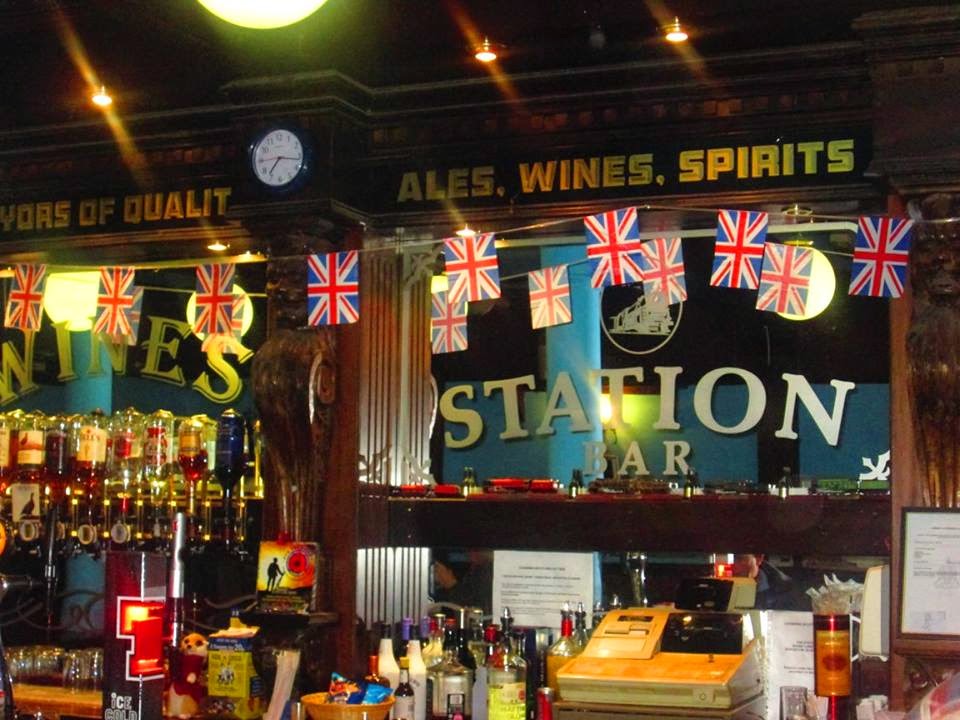 At it was now 7.30 we thought we better head to the game.  It was an easy trouble free walk to the ground.  It looked quite impressive from the outside.  I was in the upper tier and it was a fair old hike up to the top!


So for one night only Celtic park belonged to England, we ruled on the pitch and out sung them off the pitch. From the National Anthem to rule Britannia echoing round the stadium, love it love it love it.  Nights like this are why you follow your country round Europe and the World.  GSTQ! 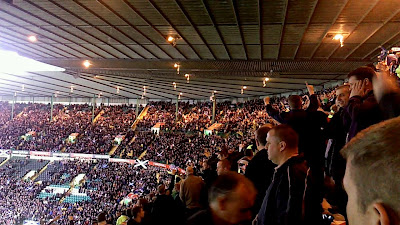 Flower of Scotland at half time So after the game we decided to return back to the Station hotel for another beer.  We only had time for one more as time was called, so it was the short train trip back to Glasgow Central.  Most pubs were shut but we found a hotel bar with a few lads we had been in Brazil with, so was rude not to join them.  I caught the 12.30am bus back to the airport and by 1.30am was nicely tucked up in bed, to be hideously woken by by alarm just 3 1/2 hours later as I was on the 7am flight back to Gatwick.  I felt dreadful, but there was a nice view of the sunrise above the clouds just after we had taken off,  I then fell asleep and woke up as we touched down at Gatwick.


So just 22 hours in Glasgow but what a fantastic few hours. Passionate fans for once match by a passionate team. Hopeful signs for the future. So that was the final away trip with England for 2014, from Brazil to Switzerland to Estonia to Scotland.  Roll on 2015
.
.